Here is my latest piece for the Alyth Voice - the May number.

A conversation overheard on a bus the last time Louise and I visited Edinburgh led to a brief and informative exchange with our fellow passengers about those apps that tell you how many steps you have walked. Now I am smitten with an obsessive need to walk at least 10,000 steps a day. Well, that is all to the good.

Thinning in one of the plantations gives me a reason to walk over and see how the work is getting on. This takes me through one of the latest plantings.

Striding along one of the old tracks that passes through the ground we had planted in 2018 it is hard to avoid noticing the exposed tunnels of the voles. The place is pock marked with them. From time to time I notice that a sapling has had its stem gnawed, and bared of bark, by voles. Throughout the area, as a counterpoint to the signs of the voles, are abundant fox scats: they are everywhere, as are owl pellets. Every now and then you can see digging where a fox has tried to unearth a vole.

Around the outside of this plantation, whose little birch trees are showing the first signs of bud burst, is a heavy duty fence: high to shut out deer and netted lower down against rabbits. Here and there foxes and badgers have lifted the net and found their way through to hunt for voles and mice. When we realised that foxes and badgers were trying to enter the area during the winter of 2018 we arranged for badger gates to be installed. However, these seemed not to be used often or at all by those for whom they were intended, the foxes and badgers preferring to make new holes for themselves. This seems to me to be very understandable. If you were a fox or badger and knew about our species’ unrelenting persecution of their kind would you trust a gate that had been specially made for you? No, you would not. You would say, as our soldiers used to say, in the days of the war in Northern Ireland, ‘don’t go through the gate because it may be booby trapped. Cross the fence somewhere else.’ So, like good soldiers the foxes and badgers avoid the gate and make their own way through the fence, lifting the netting and pushing through. For the human managers of the plantation this is an irritation and an expense. A hole in a fence is an opportunity for unwanted visitors such as rabbits, capable of devastating young woodland, so they must be shut out, but it is also the access for the very creatures that you should want to help you establish the young wood by eating the tree predating herbivores.

“Step on,” I say to myself and look at my iPhone see how many steps I have taken since I last looked a few minutes ago.

Another day, another walk; this time not so vigorous. I am back on a woodland path. It is warm. It is early afternoon. Birch and willow are coming into leaf. I rest on the trunk of a fallen tree by the burn. Well, fallen? It was felled some years ago by a beaver. Sap bleeds from a nearby stump.  I sit and watch and watch. The water gurgles past and a pair of buzzards flies overhead. Time to step on through the green pavilions of spring. Persephone is back from Hades.'

The longer evenings and the growth of vegetation have made it much easier to see beavers going about their business. This one was grazing on the young grass growing around one of their pools. I have had wonderful sightings of otters hunting, playing and play fighting with each other. Similarly it has been wonderful to watch beavers play fighting together. It is curious to witness otters active at one end of the pool and hear a beaver gnawing something near the lodge. Next a fallen tree in the pool moor hens have made a nest. Seven tiny, black chicks have hatched out and will have to survive the otters in the pool that the beavers have made for them. 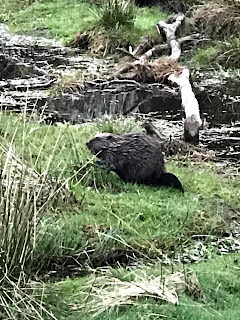 Every now and then I notice elm. Back in the '70s most English elm (Ulmus procure) in England were killed by Dutch elm disease. By the mid 80s most of the wych elm (U.glabra) in Scotland had gone the same way. We were told that any apparent recovery would be vitiated when, getting to a certain age, recovering elm would succumb again to the fungus bearing beetle. However, it does seem that some trees are getting beyond this stage and growing beyond bushes into trees. I came across this row of three or four elms growing along the old drove road that goes from Glenisla to Alyth. I hope they survive and become fine trees. 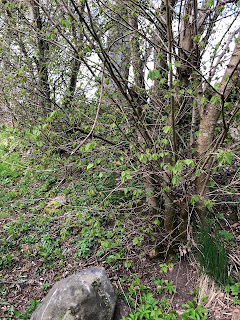 Walking on down this old drove road, a mallard duck flew up. I looked and saw her nest with its  clutch of eggs. 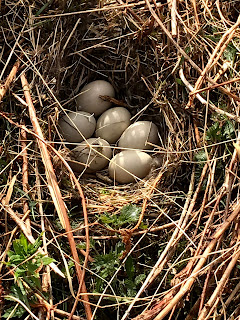 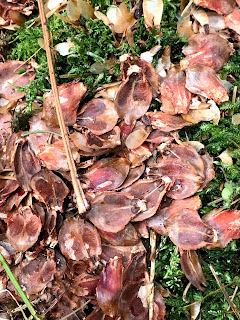 And what about seed years and voles and El Niño?