Yes, it's time to post again. Here is my piece for this month's number of the Alyth Voice, now published on line.

It is time to rise and go. The vapours of my post prandial repose are receding and a cup of coffee will clear the rest. Then it will be hey for the hill!

Which way will my stick take me? Go north and then west it directs. I march past the Grieve’s House. A peacock has pecked and broken a window on the ground floor. There are some who wish to exonerate him of this crime, but I have found recipes for roast peacock on-line, so note that the window breaking peacock is for the chop. The execution, followed by celebratory feast will happen once Covid restrictions are relaxed.

Spring is rushing into summer. The tentative steps of the last month have become a gallop as trees that seemed to be bare only a few days ago are now in leaf - except the ash, that is (and the black alder). Ash is always late, as is the alder, but the prevalence of ash dieback means that many of the ash we see still leafless are dead or dying. The wood anemone’s moment of glory is passing, but wood sorrel is still plentiful. Already chickweed wintergreen is blooming in some places.

Out on the newly planted area of the Bamff Hill there are carpets of cuckoo flower. It is a delight to see these pretty, pinkish flowers at the same time as hearing the call of the cuckoo, with whose return its flowering coincides. Lady’s smock is an alternative name for the species (Cardamine pratensis). Orange tip and green veined white butterflies feed on it.

Where were we? Oh, yes, walking and musing, I think. Wood violets contrast with wood sorrel: violet and white against lush green. And the wood wide web beneath it all. Did I turn left? No, I about turned and headed down the drive to consider the willows. Great candelabras of new stems are sprouting from their coppice stools. A vole runs towards me across the drive. I watch it disappear into a bank of primroses and then reappear for a moment before it hurries into the next tunnel of dry grass. Beyond the little stripe shines with marsh marigold (aka kingcup), a member of the buttercup family.

What is that word ‘stripe’? It is a Scots word for a rivulet, or rill. I was reminded of it recently while browsing through the late Adam Watson’s ‘Place Names in much of North East Scotland’. In the terminology of hydrologists and geomorphologists a stripe is a first order stream. In immediately local terms stripes or runners join the Bruckly Burn, which flows into the Alyth Burn at Mill of Fyal as the charter says. Downstream of Alyth the burn becomes the Water of Quiech and joins the Isla at Inverquiech, where there was a royal hunting lodge. King Edward I of England stayed there on at least one of his punitive expeditions into Scotland in the 1290s. I don’t suppose that king ate peacocks while on campaign, but his people must have fed him venison killed in the Forest of Alyth.

There was still a bank of wood anemones in flower at the Steffort as I walked past and a few dandelion clocks reminded me of the passing of time and the seasons. ‘Tout passe, tout casse, tout lasse, mais tout se remplace.’

Well, who knows if it will come to that - the fate of the peacock, I mean? An appeal on the media for understanding homes to welcome peafowl resulted in several replies. We shall see what comes of them.


18th June.
No developments in the affair of the peacock so far: some enquiries, then silence.
I was very excited to see chicken of the woods (Laetiporus sulpureus) in ancient woodland near Bridge of Cally recently. For some reason the photo I took of this fungus will not come over to Blogger. I was also delighted to see woodruff (Galium odoratum), whose photo did paste onto this blog. 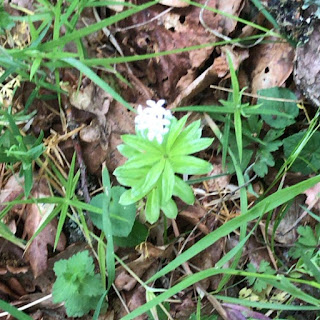 Here is a piece that I wrote for July's 'Alyth Voice', but didn't send because something more exciting came up and I decided to write that up and send it in as my contribution.

The WhatsApp message announced itself with a ‘Ping!’ The message was brief it said get your act together and produce something for the ‘Voice’. Of course I must do that: so it’s on with the boots, stick at the ready and, with my binoculars around my neck, I stride out. Beyond the herbaceous border of Bishop’s weed in full bloom I pass the row of lime trees at whose feet a bank of Siberian Purslane displays its pink flowers. This species is described as being originally from western North America, not Siberia as its scientific name, Montia sibirica (Claytonia sibirica is a synonym), suggests, but I see from its entry in Wikipedia that its range does include the Commander Islands, the westernmost of the Aleutian Islands in the Bering Straits. Striding past this gathering of incomers, which have been here since the eighteenth century (their leaves are good in salads,) there is an assembly of yellow flowered Wood Avens, some of whose stems are decorated with cuckoo spit. I wonder if I will see any of this plant’s near relation the Water Avens with its drooping head and pinky purple flower - I am sure that there are some further down the drive. These two species are closely enough related to hybridise freely, which always seems odd to me because, superficially at least, the flowers look so different. Past the trees, the drive side verge is grassed out. We are at that time of year when grasses, particularly the agricultural species, are reaching the peak of their annual growth and coming into flower. I notice some Timothy whose stamens are heavy with golden pollen, waiting to be carried away by the wind.

Left along the Burnieshead path: yesterday evening wrens were cacophonous. The young were trying out their wings. A week before Greater spotted woodpecker fledglings were making a tremendous noise up in their hole in a dead sycamore tree: their parents were flying about the nest, apparently distracted by their offspring. The woodpeckers are quiet now. I suppose the young have fledged and flown. On the water the mallard duck with her brood of seven continues to supervise their activities. A couple of weeks ago I watched with amazement as the ducklings attacked a hatch of mayflies, or some other aquatic invertebrate. They darted about snapping at the insects. A few days later I saw them busy again, hunting for something on the surface. Some were upending. It was as though they were getting lessons in hunting and gathering. All the while their mother sailed along, watchful and attentive. In the meantime the moorhen pair still have one of their first brood of chicks, the other six having disappeared. Otters were around at the time of this disappearance and I haven’t seen them since. I wondered if the moorhens would try to breed again. One evening I saw a couple of young with one of the adults.

The ferns are now fully grown. It is a pleasure to see a beaver swim over to the bank and then, some moments later, swim back to the lodge with ferns trailing from its mouth. I used to think that ferns were good only for bedding, but I have learned that the male fern (Dryopteris files-mas), one of our commonest species, is valuable nutritionally. I walk on. A roe doe in her brilliant summer coat of chestnut red bounds out of the young regenerating birch. Bumble bees forage in the broom and foxgloves are massing in the clearings, ready to burst into purple and white.

Walking back up the drive after the circuit that has taken me by the Old Drove Road, a new bicycle path through the Steffort Woods and on to Cold Corner, I see Water Avens flowering and scattered groups of columnar purple bugle. All through the beaver wetlands along the drive the willow and birch regeneration is flourishing. The yellow flag will be out soon and I notice knapweed readying itself to flower. The seasons advance. It is high summer.