More about Canyonville and the State of the Beaver Conference 2017


We reached Canyonville. The air was crisp and promised frost that night. Word was that there was a lot of snow higher up and not far away. The prospect of a visit to the Crater Lake was dismissed.

We met our fellow Brits and Gerhard Schwab in the Seven Feathers Hotel as well as Leonard and Lois Houston, and ate and drank with them before heading for bed.

We were sorry to learn that Heidi Perryman had decided not to come after all, put off by the prospect of floods. Louise and I were lucky not to have been blocked by landslides because two or three roads were blocked by landslides, either after we had passed through, or because we didn't take those roads by accident.

As she was absent Heidi sent us the following talk as a video. Here is a link to it:


Stan Petrowski welcomed us all, but the first talk came from Derek Gow who was standing in for Professor Bryony Coles. The talk covered the familiar grounds of Bryony's 'Beavers in Britain's Past' of 2007/8, but it was interesting to see photos of soil horizons in river banks with great gaps, filled with different sediments, their shape suggestive of beaver burrows, the significance of which I had not fully taken in before.

Gerhard Schwab's talk covered much familiar ground to do with the interface between beavers and people in Bavaria. The theme of much of the conference was exactly that. Gerhard also introduced us to Max Behr Amtman who worked on the protection of the beavers of the Elbe floodplains in the 1920s. 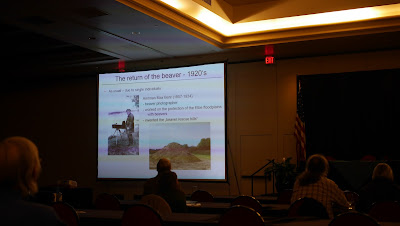 Translocation of beavers came up as a subject. It was interesting to learn of high failure rates (up to 40%) in some projects. Much of this had to do with predation by cougars and coyotes. Young adults of dispersal age must be specially vulnerable.

One of the most interesting talks was given by Stewart Reid. Dr. Reid spoke about the relationship between beavers and Pacific lampreys. Two years ago when Louise and I attended the last State of the Beaver conference I found myself wondering about beavers and lampreys. It struck me then that our river and brook lampreys (as ammocoetes) should benefit from the fine sediments that accumulate on the upstream side of beaver dams, as they seem to in the Pacific North West. As the Tay is a Special Area for Conservation in part because of the presence of three species of lamprey this is something worth remembering. On the other hand the amount of agricultural pollution in the lower stretches of the Isla and other tributaries of the Tay is probably such as to make the survival of lampreys difficult. It would be interesting to learn more about this.

Vanessa Petro spoke about beavers in managed forests. She started her talk interestingly by saying that we know surprisingly little about the species. For example it was not generally known that American beavers like the Eurasians, often live in bank burrows.

I became aware of this recently. It seems that beavers of both species are more flexible in their solutions to housing problems than people had thought.

Mike Callahan showed us a design for a ditch levelling device for narrow channels with high flows: 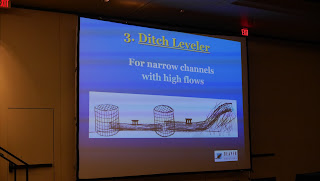 That is enough for now.

Except that here is a photograph of Stan Petrowski 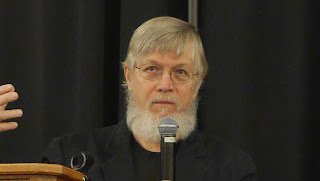