Some random thoughts about our visit to the 'State of the Beaver' Conference at Canyonvillle, Oregon.

I have been having difficulties in downloading photographs and thought I would move my blog to Wordpress. However, I thought I would try Blogger again and, lo and behold, photos downloaded.

Anyhow, just to start with her is my piece for March's number of the Alyth Voice.

A Letter from California.

They do say that San Francisco is inclined to rain, but nobody told me that Los Angeles would suffer a massive rainstorm while I was there. Instead of golden sun and blue skies the rain lashed down, tearing old palm fronds off their trees and casting them on the roads and sidewalks. The famous Hollywood sign was hidden in the mist and there was no view from the Griffith Observatory. Ten inches or so of rain fell in the storm of Friday, 17th February.

California is in the throes of a metereological turn around. For a good six years there had been unbroken drought and now there are floods. The US's highest dam, the one at Oroville was in danger of overflowing and the massive outpouring of water through the spillways threatened to destroy these structures themselves. About 180,000 local people had to be evacuated from their houses in case the dam itself collapsed. An article in the current number of the 'Scientific American' reports that recommendations that the dam should be strengthened as a response to the changing climate were turned down in 2008.

Interstate 101 is the highway that takes you through much of the Central Valley of California. This lies between the coastal range and the Sierra Nevada to the East.  The area amounts to some 18,000 square miles and is given over to intensive agriculture. We drove past vineyards and huge orchards, some of them almond orchards in flower. There were plantations of peaches and vast fields where rice would grow. Irrigation pipes were to be seen in many place, a curious counterpoint to the flooded fields in which those pipes lay. Single enormous fields stretched out of sight from the road as we drove by. The biggest fields in Strathmore were dwarfed in comparison.

The signs of the recent rains were present everywhere, but it was not until we drove through the northern end of the plain that we saw the extent of the flooding caused by the rainfall that has threatened the Oroville dam (and a couple of others) with apocalypse. By this time we had left Interstate 101 and were heading for Chico. I noticed a high rampart to our right and then saw a sign to Oroville. Wow! I thought. Passing so close to this enormous lake/reservoir with its threatened dam, was an unexpected brush with current headlines. We drove on and the rain continued to lash down. I noticed a huge flock of snow geese resting in a flooded field. On the other side of the road some Canada geese were grazing.

Looking at maps later I discovered that the rampart we had passed by was the boundary of the Thermalito Afterbay, which is part of the Oroville-Thermalito complex of reservoirs and structures. The main high dam lies further to the east. It was completed in 1968 and created a lake that flooded the Feather River and various others in the catchment to store water for hydroelectricity, irrigation, flood control, etc.

In my excitement about the Oroville dam I nearly forgot to mention our visit to the Muir Woods National Monument. This is a small reserve of about 500 acres a little to the North of the Golden Gate Bridge, and one of the last areas of old growth coastal redwoods. It was declared a reserve by President Theodore Roosevelt in 1908 in honour of John Muir who fought so hard throughout his life for the protection of wilderness and for the establishment of a system of national parks in a country that was being assailed by the demands of modern society and the growth economy. The great trees are an astonishing sight and presence, for which nothing can prepare the visitor. The old trees in this wood are at least 1,000 years old.

Rolling back in my memories of this journey from Los Angeles to Oregon I must mention Monterey, the site of John Steinbeck's 'Cannery Row', where we stayed a night. The canneries in Monterey processed fish, mainly sardines, of which there was once tremendous abundance, but the fishery was grossly over exploited and eventually collapsed by the late 1940s, leaving a legacy of pollution in the Bay and collapsed economy on land. Steinbeck's friend, the marine biologist Ed Ricketts, and Julia Platts, the mayor of the town, campaigned for the restoration of the ecology of the marine environment with eventual success. Ed Ricketts is the 'Doc' of Steinbeck's novel. Dr. Ricketts founded the world famous aquarium in Monterey, a major attraction to visitors.

Now we are in Canyonville, Oregon after driving out of California, over the mountains, ready to attend the 'State of the Beaver' conference for 2017. 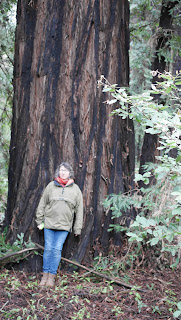 Louise standing at the foot of a coastal redwood at Big Sur. The road to the South had been blocked by landslides and the road we took down fro Monterey was closed the next day. 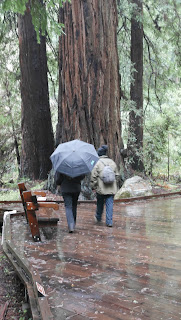 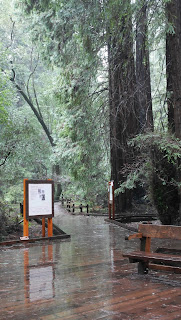 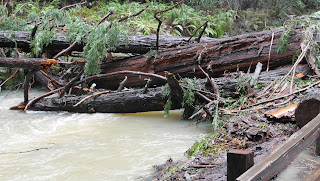 We visited the Muir Woods National Monument - an area of about 600 acres which were declared protected by President Teddy Roosevelt in 1908. They escaped logging because the ground was at the bottom of a deep canyon. The wood was bought by Congressman William Kent and his wife. In 1906 the wood was threatened by a proposed dam. Kent insisted that the monument be named after John Muir.