Being short of time I thought I would look out something I had written earlier and put it in for April 2017. But no, that would not do. The articles I found were all relevant to some extent, but not enough in the particulars. Snowdrops, aconites, migrating geese, beavers and wild boar were all mentioned in the articles that I looked through, but in the context of the year and seasons they described they were irrelevant to the present. There were late years and early years and comments that belonged to a particular year. No, I decided, I would not get away with it. I would have to start afresh and make time.

This year I see that daffodils are beginning to flower, which seems a little early, but then the weather has been quite mild. Buds of the red berried elders are about to burst and I see one of those flowering currants coming into bloom. Greater Spotted Woodpeckers are drilling away in the snags of dead trees of which there are plenty here, especially along the banks of the Burnieshead Burn. Song thrushes are singing furiously from the tops of trees. One, at least, has been pretending to be an oyster catcher.

What of the passing winter, revived as it is from time to time by frosts and teuchat storms? The green sandpiper that wintered here for the last two years made a brief touch down along the Burnieshead Burn a couple of weeks before Christmas, but I didn’t see it again. The dippers were absent too. Our Dutch shooters saw a flock of snipe during one of their visits.

While walking in the Wet Wood I came across an otters’ latrine by the side of the burn. Usually I come across single spraints in various states of dissolution, but  this latrine comprised at least ten separate scats: clearly a meeting place for otters. The spraints are sources of information for the animals. They learn from each other’s faeces what there is to eat in the area and other important information such as the sex and state of sexual readiness of the informant. Otters are not seasonal breeders, but will breed whenever their body condition allows.

The species has made a wonderful recovery since the dark days of the 1970s when it nearly became extinct in this country owing to the widespread use of various poisons in the environment. Happily, scientists of the Nature Conservancy’s Monks’ Wood Research Station, led by the late Derek Ratcliffe, were able to persuade Government of the toxicity of the organochlorines and then the PCBs. This led eventually to the withdrawal and banning of these chemicals. Rachel Carson’s famous ‘Silent Spring’ was a classic summary of the case against the chemical companies’ irresponsible promotion of the use of these substances. And still the struggle continues: the British Government, unlike those of Germany and France, refuses to ban the neonicotinoid chemicals that threaten to destroy honey bees and bumble bees, essential pollinators of so many crops.

Otters are still rare in various parts of mainland Europe, but making a come back just as ours have. There is the possibility of recovery: we must make the most of it. 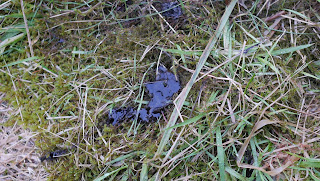 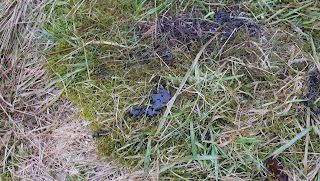 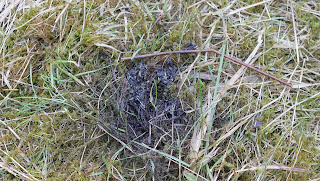 There we go! Some photos of otter spraints

I should have pointed out that the short article is my contribution to April's number of 'The Alyth Voice'.

And now to the same walk at Bamff where I came across the otters' latrine. 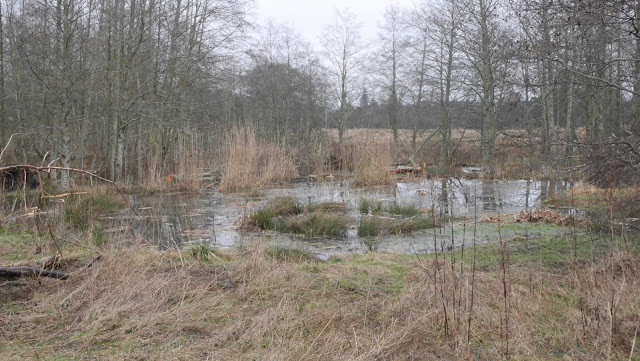 This is the little pool that John Lister-Kaye dug with the excavator in September 2001. 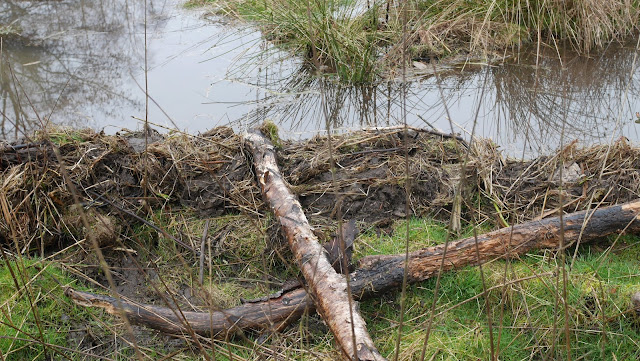 The new dam for that pond - the dam topped with turf and mud.