Much has already been written about the flood of 17th July and its aftermath, and I am going to add to it. An important aspect for those of us who are interested in the official restoration of the beaver to Scotland is the concerted attack on the species by interests hostile to their return.


Peter Grewar Jr. seems to have begun the campaign. He visited Alyth on the 17th and drove up to Bamff where he noted that some rough grazing had rushes growing in it that indicated poor drainage.

High water table indicates that there is little capacity for the soil to take more water: a reasonable point of itself, but what he missed was that although that field is a wet field it is not always so, at least not in summer, generally speaking, when there is a water deficit for at least some of the time. Ewan Pate in his article in the 'Courier' last week spoke heavily and portentously about poorly drained land and those who own it.

Why would you drain generally wet land if there is no significant profit to be had if you did? Besides what beaver dams achieve is to spread the water, so taking the energy out of the flood - leaving aside the important filtering functions: the removal of surplus nitrates, phosphates that are such a problem in the diffusely polluted waters of lowland Strathmore. And then again there is the biodiversity of wetlands. 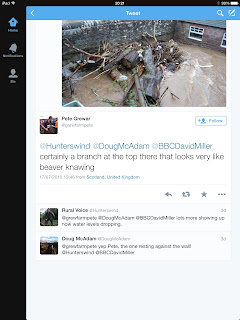 Originally Peter Grewar Jr. claimed that logs and branches in the debris that lodged in Alyth were the work of beavers. A tree still in the Den of Alyth, upstream from the town had the marks of beavers on its barked trunk, he had been told. Our friend, John Ferguson, who helped clear the Alyth Burn of debris  told me that he had seen no examples of timber that had been gnawed by beavers.

Here is a tree that was photographed and the barked bits of the trunk described as having been stripped by beavers. In fact the bark must have been stripped off the tree as it was washed down the Alyth Burn and rubbed against rocks on the river bed, or other detritus. I could see no signs of beaver tooth marks on this tree or any of the others I walked by. 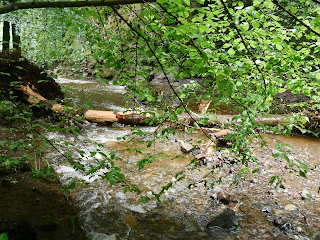 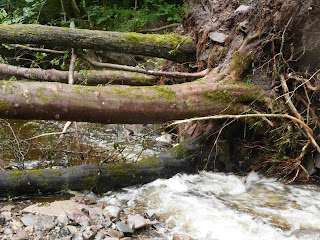 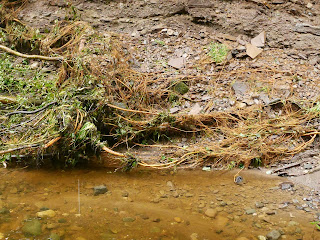 The big branchy trees,
Ripped from their roots. (Gaelic song)

But what if there were? The area of the beaver ponds at Bamff amounts to about a hectare. Taking into account the rest of this mini catchment of perhaps up to five hectares, you have to remember that the whole Alyth Catchment amounts to 3600 hectares. If we take the outside figure of five out of 3600 hectares that is 0.001 of the catchment. Water did run over the barrage that closes the ponds at Bamff, but did not break it, or any of the other dams at Bamff that are part of the Alyth catchment.

The blame game started by a few people spread with the help of one Alex Stoddart of the Scottish Countryside Sports campaign. This group seems to be a subsidiary of the Scottish Gamekeepers' Association.  'The Courier' published an interview with him in which he spouted all sorts of nonsense. This nonsense was published in 'The Scotsman' and 'Herald' as well. Much of the same article found its way into the 'Sunday Express'. It is true to say that I was quoted giving a response to Stoddart's assertions.

In the meantime opinion in Alyth itself had focussed on the management of the Alyth Den, a riparian woodland, managed by Perth and Kinross Council for recreation. Over the years paths have been made, some building up of the river bank carried out, and a large concrete sluice installed, as well as a foot bridge. The foot bridge was built in 1990 by the Aberdeen University Officers' Training Corps. Solidly built of two massive steel girders, set in concrete, the bridge survived.

The criticism of Perth and Kinross Council was based on the fact that substantial amounts of chain saw cut logs had been present in the debris that carried away the two foot bridges and had come to rest against the bridge in the Market Square.

Given the force of the flood, already washing away farm roads as far away as Craighead of Bamff, I wonder how relevant the logs from the Den were. 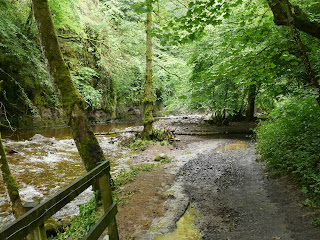 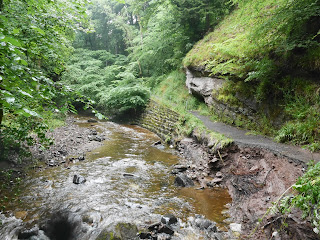 Built up bank with downstream banks swept away. 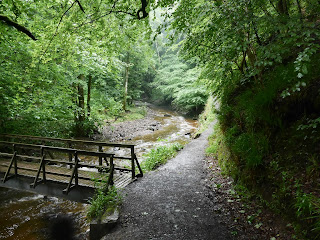 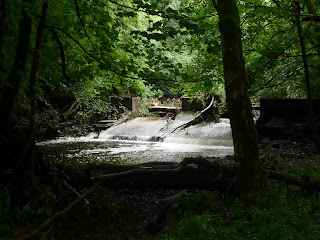 A large sluice close to the town of Alyth from downstream side. 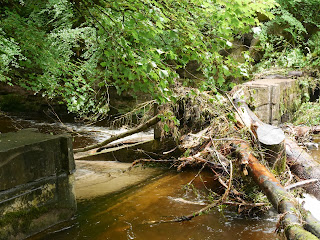 The same sluice from upstream with some debris still present. Did this block early in the incident, get torn away by a build up of more debris and contribute to the second pulse of flooding of which people speak?

The severity of the rainfall of the night of 16/17 July had been predicted by the UK Met Office. 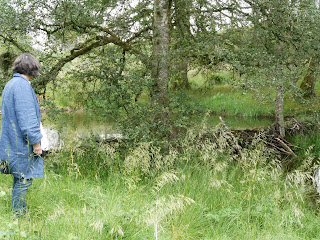 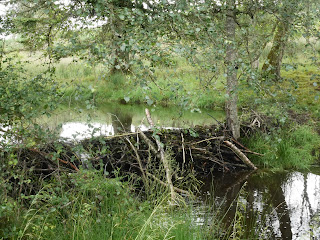 Alan Law, part of whose study area for his PhD about beavers and their ecology was at Bamff, tweeted. 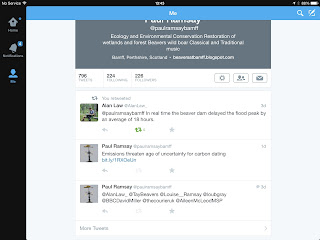 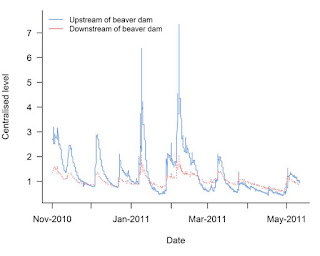 This graph is taken from his research. 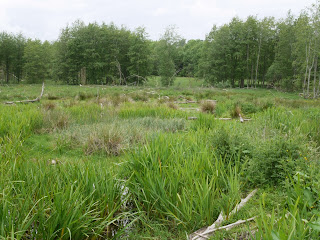 This photo shows the Wet Wood, which is on a mini catchment that flows via the Auchrannie Burn into the Isla and so misses out Alyth, late in June when there had been a spell of dry weather. Some water did remain in a channel immediately next to the dam (the Long Dam), but otherwise the area was very dry. 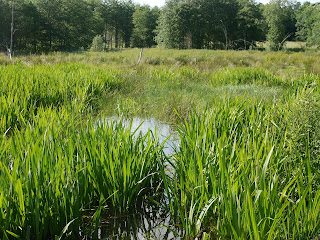 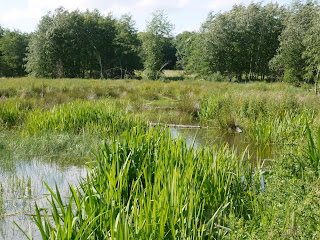 This photo and the ones below show the area after the 17th, now once again full of water. 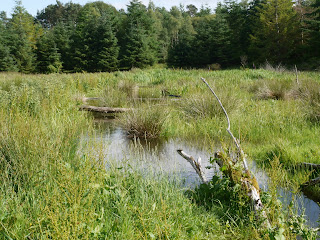 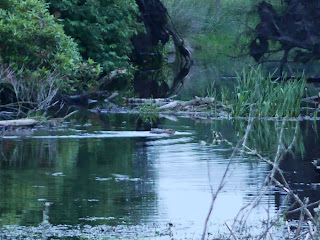 A beaver kit explores its surroundings at Bamff

Here is my piece for August's number of 'The Alyth Voice'

A wall of water thundered down the burn: within a few hours the Market Square of Alyth lay four feet deep in it. Cars parked along Commercial Street were shunted onto each other like so many copulating beetles. John Ferguson rescued a lady caught in her car. The occupants of a hundred houses had to be offered accommodation as their homes flooded. Massive amounts of woody debris, including large bits of tree trunk had smashed the two foot bridges. Some came to rest in the arch of the main bridge that spans the burn, as did a skip, while the rest sped on. A sheep washed by, struggling on the chaotic waters. Luckily the old pack horse bridge survived.

A downpour of unprecedented proportions had struck Alyth. The Meteorological Office has been warning us for some years that the kind of flash flood that results from such an event is to be expected as a feature of climate change. But why Alyth, we ask ourselves? There is no answer to that, but to say that Alyth is not alone: think of Bankfoot, Pittodrie in Aberdeenshire, even the Open at St.Andrews. These may be random strikes that come with little warning. A forecast of ‘heavy rain’ doesn’t imply massive flooding, after all: or does it?

The flood itself was relatively short-lived. By mid-day on Saturday 18th July, a visitor to the Market Square, would hardly have known that a serious inundation had taken place, except that clearing up was continuing and the high visibility jackets of the SSE people were prominent. Driving home from Edinburgh, we could see flood waters gathered around the confluence of the Isla and the Ericht.

In the meantime those affected by the flood had been offered temporary accommodation and food and clothes provided. The community of Alyth had pulled together tremendously and with characteristic generosity, I learned, but the repairs to homes and property will take a long time to achieve. Some damage may prove to be irreparable.

Flash floods happen in a context. The Alyth Burn rises high up in the Forest of Alyth, way back near the watershed, north of Drumderg. It flows through this bowl of land, joined by the Ollies Burn in the den south of Tullymurdoch and to the west of Gauldswell. The dens that receive the runoff from the open hills concentrate the flow: a cloudburst in the hills must lead to flooding below. This is what happened on the night of Thursday/Friday, 17th July. The rush of water uprooted trees, smashed fences and dykes, carrying with it water gates from the Mains of Creuchies as it flowed past on its way to Alyth. At Mill of Fyal water from the Welton Den, the Bruckly Burn and Bamff (and yes, water from the overtopped beaver ponds, too), joined the wall of water, gathering momentum on its way through the Alyth Den and so to and through the town.

When Alyth grew out of the old town that ran along today’s High Street into the low boggy ground below, the burn was effectively turned into a canal, and the drained haugh next to it built over. As a result, for the last two hundred years or so, the water has not had the former flood plain into which to overflow and lose energy. This is no comfort to those whose homes and shops have been damaged in the latest flood, but it may be an opportunity to consider aspects of flood and catchment management that have eluded us so far, but need to be resolved in this time of climate change, so that people in Alyth can live reassured.

The problem for Alyth as a flood prone place does not lie so much in the Den as in the hinterland. The open hill grazings and the ploughed coniferous plantations shed water with great speed. The Rivers Isla and Ericht are notorious for the speed with which they rise and fall. There needs to be a good programme of re-afforestation of the hills. Research for the Eddlestone Water project has shown that soils under old broadleaved woods are ten to fifteen times more permeable than are soils under coniferous plantations or hill grazings. It is time we took notice of this kind of research and acted.

Will this kind of flood, relatively infrequent until now become a 30 year event? What will insurers think of that? Perhaps flood prone, flood plain settlements will have to move to higher ground?

The press reaction fails to credit the Alyth folk with their intelligent and compassionate reaction as they set about recovering from the shock of the flooding.

Very few believed that the beavers had any part in the floods: in fact the idea of beavers with chainsaws has become a joke.