January 2015 - Dippers and Other Matters

This is my piece for February's number of the Alyth Voice.

Dippers in the Burn

Standing for a moment before joining the queue for the checkout in the Co-op, I looked through the magazines on the periodicals stand. I noted 'Horse and Hound', 'the Scottish Farmer' and sundry others, many with pretty cover girls: I decided that I liked a lovely brunette best, and then my eye lit on 'The Scots Magazine'. Now, I had been meaning to buy the current number because I noticed somewhere recently that Jim Crumley had an article about beavers in it. I took a copy from the shelf and looked for the piece in question. Well, there it was and blow me down if he hadn't written about the very same subject that I had chosen to write about in February’s ‘Voice’! In short, Jim's article in 'The Scots Magazine' is as much about dippers as it is about beavers: and why not? Here is what I wrote, but I should like to recommend Crumley's excellent piece in January's 'Scots Magazine' to you.

The dipper is a delightful bird. For a while I have been able to watch one going about its business along the Burnieshed Burn here at Bamff. The first I know of its presence as I walk along the path is the song,  melodious, but slightly harsh. I stop and stand, wondering when the bird will reveal itself to me. It is going to be hard to make out in the snow blotched landscape. Perhaps it will show itself by taking off and flying swiftly along the burn to some other stance, where it will look out for things to eat, or it will give itself away by bobbing up and down and displaying its white front? Today, it was the latter. All of a sudden I realised that a white patch on the other side of the burn was the dipper. I watched to see what the bird would do. At one moment it jumped into the water and splashed around for a while. I hoped to see what it had caught, if anything, but could see nothing. It emerged from the water and went back to its stance. Dippers favour streams with fast flowing water and gravelly beds. Their diet consists mainly of the larvae of mayflies and caddis flies and other insects, as well as some fish eggs and very small fish. I watched for some moments and took a few photographs before moving on into the wood. The exciting thing about the colonisation of the Burnieshed burn by dippers (and the visit last autumn of a kingfisher) is that it is evidence of the increasing productivity of the burn and its capacity to maintain populations of birds, fish and mammals, having been until eight years ago no more than a narrow ditch, and seasonal destination in the years past of breeding sea trout. The harder weather of the last few days has brought in the snipe. Out for a walk at dusk, I disturbed several of the birds. They zigzagged into the sky, crying ‘Grit, grit!’ Three mallard quacked their way off the flooded land as I continued on my way, slithering cautiously over the refrozen patches of ice. Over the fence at the end of the field, I climbed up the bank and on to the farm road, then down the other side and over another fence into the West Wards. The burn is running full and the water level in the wet wood beyond is as high as I have seen it. The neatly cut canals are flowing and paths to felled trees show that the beavers are active. Having completed my circuit I headed for the warm glow of the kitchen windows and a cup of tea. 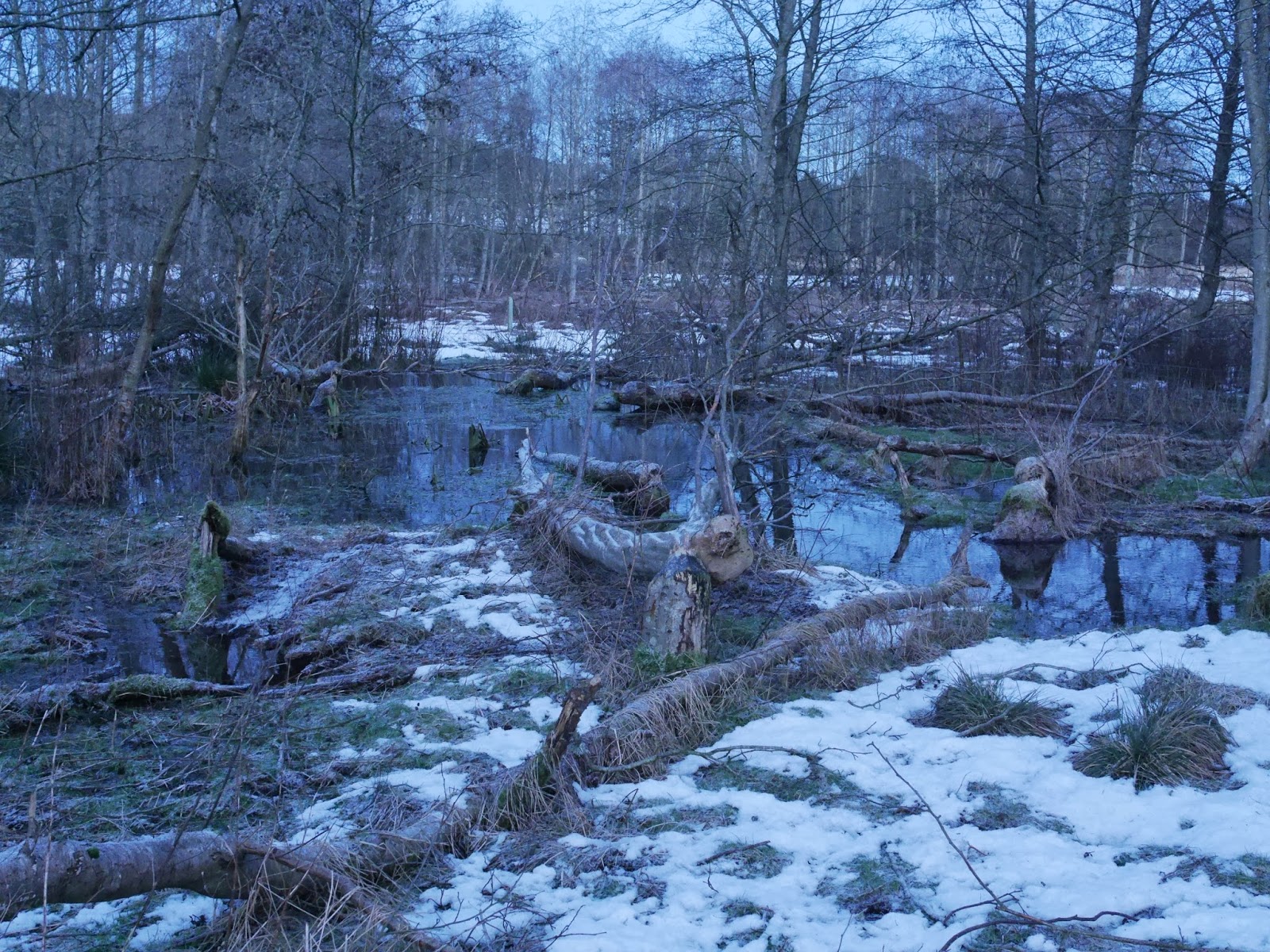 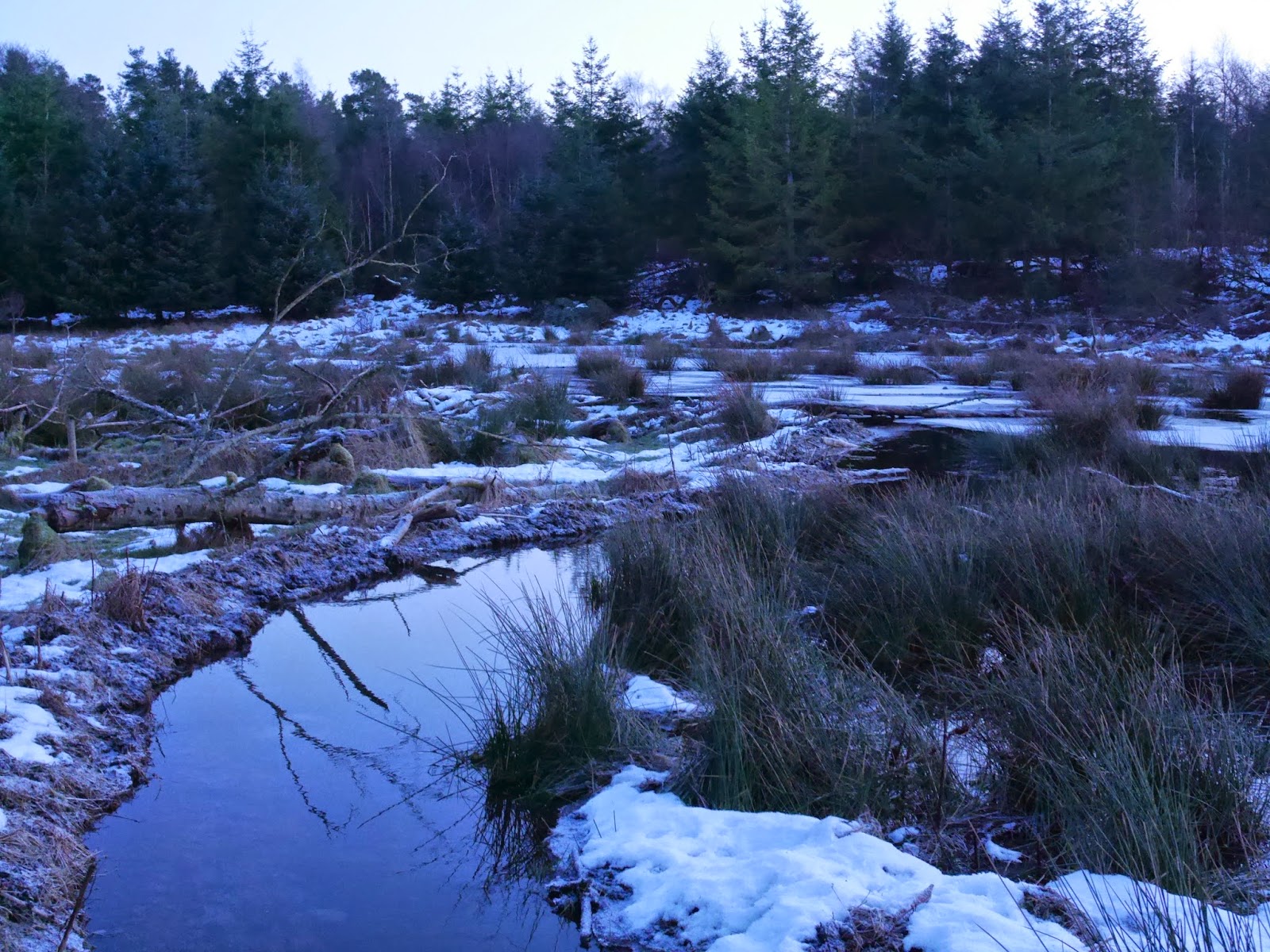