I Missed the Deadline for September's 'Alyth Voice'.

There you go. There is no latitude on the deadline even for the editor of 'The Alyth Voice'.

The Sting and the Buzz

I have taken to standing and waiting for the green figure to replace the red one at pedestrian crossings with traffic lights. It gives one a moment to stand and stare. As the Welsh poet WH Davies put it:

It was just at this moment, while waiting for permission to cross the road that I heard the sound of an angry group of herring gulls. Looking up from the display of pumpkins on the other side of the road, I saw a group of gulls, a regular hue and cry, chasing a buzzard. Well, I would not have been surprised at home, but this was Edinburgh.

Here we are in Edinburgh for a few days: going to the Festival and its Fringe, walking about, reading and writing. I love Edinburgh during the Festival. I like to see all the people going about, hearing all the different languages and the discussions. What of the performances? The Marriage of Figaro, performed by the Budapest Opera was a delight. I have been haunted by magical memories of the music for the last three days.

As to reading, I have just finished ‘A Buzz in the Meadow’ by Dave Goulson. Until a year or two ago, he was Professor of Biology at Stirling University (since moved to take up a chair at Sussex University). I wandered through his department once, while lost in a maze of corridors, looking for another Dave (Dave Gilvear, a professor of fluvial geomorphology). The walls were adorned with beautiful photographs of bumble bees. Back home again, and on to the internet, I discovered the Bumblebee Conservation Trust, a charity Dave Goulson set up while at Stirling University to promote their conservation.

Bumblebee numbers are declining: thirteen species became extinct in at least one country in Europe between 1950 and 2000. Why? The usual reasons are given: loss of habitat due to agricultural intensification, urban development and disease. Last year Goulson’s book ‘A Sting in the Tail’ was published to great acclaim. An interesting section describes the dependence of soft fruit growers in Strathmore on wild bumble bees to pollinate crops of raspberries and strawberries while at the same time buying in commercially reared bumblebees. The worry is that centrally reared bumble bees may be the bearers of disease to the native wild populations.

This year Goulson has followed up his earlier success with ‘A Buzz in the Meadow’, another excellent and readable, but alarming work in which, among a great deal else, he describes his research on the effects of the neonicotinoid insecticides on bumblebees and their part in the Colony Collapse Disorder that so worries the keepers of honeybees.

When they were first introduced in the 1980s the neonicotinoids were seen as  reassuring successors to the organochlorines (DDT.Dieldrin, etc.) of the 1950s-1970s, and the organ-phosphorus compounds of the 1980s to 90s. The neonics, as they are called for convenience, are very poisonous to insects, but less so to mammals, which has to be a good thing. Since the late 1990s, however, there has been increasing concern about their environmental impacts. Like the organochlorines they build up in the soil and can linger on in sediments under water. They cause initially subtle, but real damage to the nervous systems of bees. The worrying thing is that these pesticides are very widely used: as seed dressings for cereals and oil seed rape, and as sprays for soft fruit. Being systemic they penetrate right through the plant, making the whole thing poisonous to insects. This is fine if the insects are pests, but disastrous if the species affected include bees, and the other insect pollinators that enable us to continue to live on this planet.
Did the light go green? 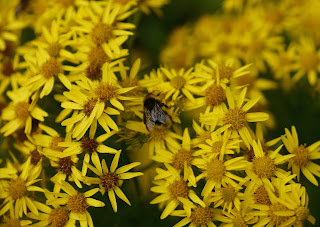 STV's Nature Nuts with Julian Clary went down very well. The filming that happened here took place last year some time, I think. Bob Smith took the part of paddler of the canoe 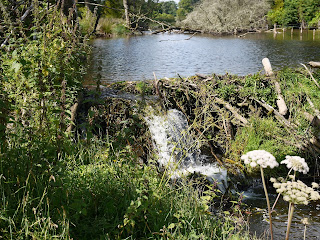 This is the 'High Dam' in full flow, taken about the 8th August.

Now we have a team from the RSPB filming beavers here. I am looking forward to seeing the results of their work.