'Summer at Last' and Photographs of the Rewilding Wetwood at Bamff.


The following quotation appeared on the BBC News web site today and figured on this morning's news on Radio 4 several times. One of those interviewed on BBC TV's morning news programme told us that the great decline of species of plant and animal had begun in 1970, the year of his birth. I remember this year so well because it was the year that I graduated from the MSc course at University College London.


'A stocktake of UK nature suggests 60% of animal and plant species have declined in the past 50 years - and one in 10 could end up disappearing.'


Below is my latest article for the Alyth Voice:


'Two swallows do not make a summer, as the saying has it, but the arrivals of chiff-chaff, willow warblers, swifts and  cuckoo are definitive. Whatever we may think, summer has arrived and the grass though late and slow to grow is on the move.

Do you ever have trouble settling down to write something: an article or a letter, for example? I could not set about my piece for this month's 'Voice', so I decided to go for a walk to clear my head.

I left the house, walking into a mild air: swallows swirled up ahead of me, twisting and turning as they hunted for insects. Two of the birds were sitting on a telephone wire: one held a feather in its bill. I looked into an outbuilding, whose time and weather warped door makes it hard to shut, and saw three nests from past years and the new nest freshly daubed with mud.

Blackbirds sang as I walked and as I walked I reflected on the state of things. My immediate purpose was to check on regeneration of seedlings in the compartment that was felled last year. I passed the Beaver Pool next the drive with its pair of mallard and moved into the dark of the Tay Bridge Wood fringed with rhododendron. Chiff chaffs sang vigorously and, as I rounded the corner of the drive to see the straight length ahead, I became aware of the misty green light cast by the birch as it comes into leaf. Thinking about this, and remembering the opinion of the friend who likened the view from this point to paintings by artists of the early 19th Century Hudson River School (http://en.wikipedia.org/wiki/Hudson_River_School), I turned to look at the swamp. Something, hidden in the mass of fallen trees, was gnawing something.

A cough from behind announced the presence of Chris Potter. He had some excellent news: a pair of peewits had hatched a brood of kits in a rushy patch that has resulted from the activity of beavers downstream. I was thrilled to hear this because, to the best of my knowledge, no peewits have bred at Bamff for at least ten years. The peewit is one of those species whose decline since the Second World War has been dramatic and linked to loss of habitat due to drainage of wetlands. Rewilding is one of the chief benefits of the presence of beavers, so the return of peewits to Bamff is an important moment. Let us hope they raise their brood successfully and that what is happening here is repeated eventually all over Scotland
I moved on into the cleared compartment. Nearer the west there were plenty of little birch seedlings among the ground flora, which included sheep sorrel, a legume of some kind (perhaps young birds foot trefoil?), broom, foxglove rosettes and a whole lot of grasses. A greater spotted woodpecker flew over and paused to examine the bark of a pine tree. It cannot have found much because it flew off again only moments after it had landed. All around me the blackbirds sang.


Enough of speculation! I continued on my way, pausing only to look for birch seedlings and to retie my shoe laces. Soon, however, it was time to head for home and take up my duties of the evening as cook.' 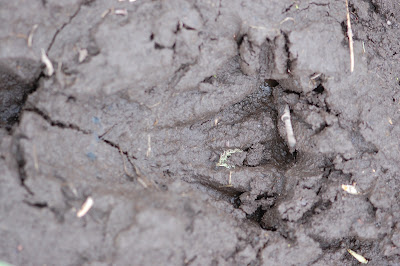 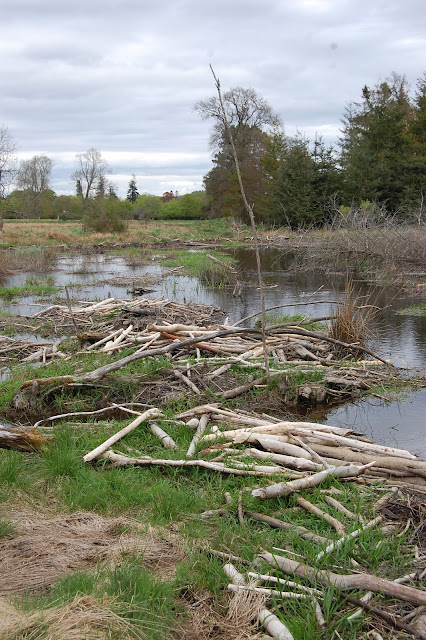 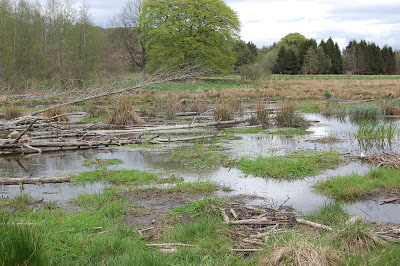 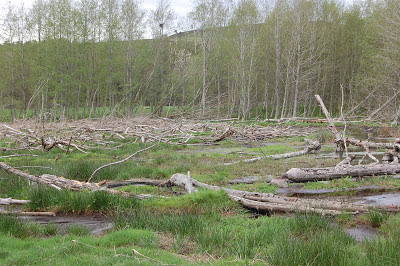 Some photographs from the rewilding area of the Wet Wood.
Posted by Paul Ramsay at 10:29