Roadworks by the Bamff Drive

At last, the decision had to be made to do something about the dam in the distance. 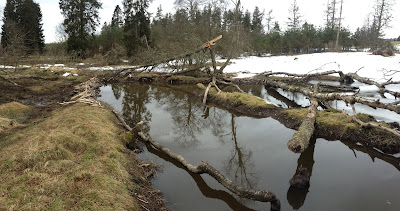 The beavers had rebuilt it after its breaching at the time of the logging of the Whitehills Plantation this time last year. Then, with all the rain, snow, snow-melt and more rain, they had gone on building up the dam so that the drive was lower than the water level at the dam. All this was continuing after the work of mitigation that we had carried out lower down the dam to protect the lodge at the end of the drive. 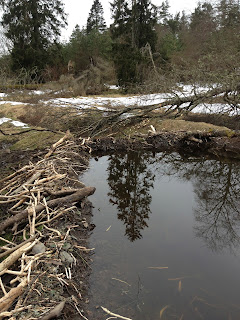 Water was increasingly running down the drive. 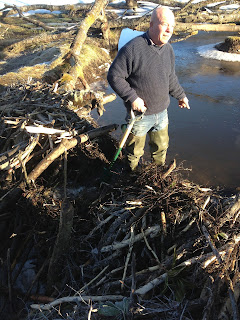 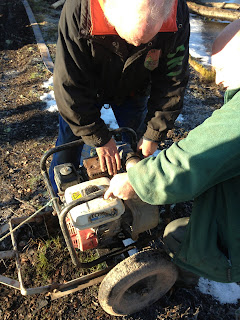 Lewis Smith (Lush) and his colleague, Terry, were keen to instal pond levellers, but felt that more radical action was necessary. Stewart Crabbe, the top of whose head is missing in the photograph on the right, found that the old stone culvert that drained the Big Pond was dug in very low. It would be necessary to unblock the culvert, in which case the dam below could not be allowed to be rebuilt, or to instal a new pipe under the drive, but lying over the old culvert. I was keen for the dam to be restored as much as would be consistent with a dry drive.

Accordingly, a pump was set to work to drain the pool that you see in the top two photographs and the dam was dismantled with great care to avoid sudden collapse. Next, Stewart Crabbe excavated the channel that leads to what had become the dammed pool. 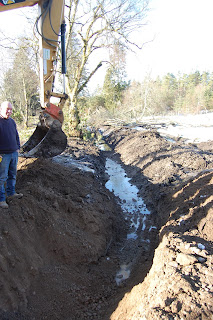 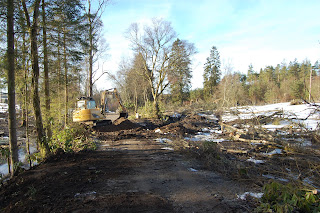 Then the drive was dug up. 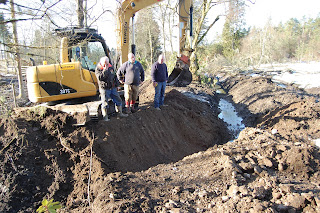 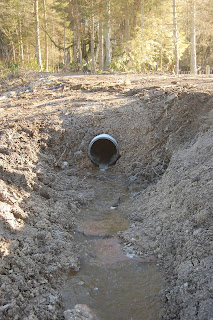 And the new pipe was installed. 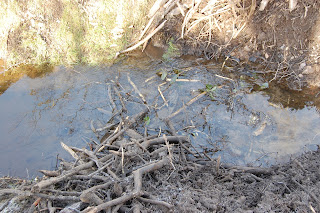 Downstream, the dam had been lowered to the bed of the ditch.

Would the beavers return to rebuild, or would they move off? 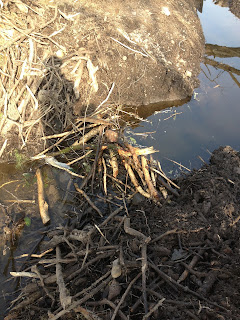 By Monday we had the answer: the beavers had begun to rebuild their dam. It remains now to decide at what level to instal a flow device.

I should say that the drop in the level of the water in the channel revealed a burrow, so the beavers will be keen to cover signs of its existence.
Posted by Paul Ramsay at 21:19