The photographs and map in this post are here to tell the story of some attempts to manage affairs to the convenience of the humans who live here, but not forgetting the well-being of the beavers.

Nearly a year ago the plantation woodlands in the southern part or bottom of the Google photo below were to be felled. The contractor was anxious that his trucks/lorries would damage the drive (the white line running through the photo), particularly as some water was overflowing damming that beavers had done west of the drive at the place marked by the two red markers.

I should mention that the drive was built in the 1840s with horse drawn carriages in mind. The traffic of lorries weighed down with loads of timber and the destruction this can bring was not thought of at the time. The consequences of tracked vehicles travelling on such a road were unimagined.

Until recently it was possible to stack felled timber by the side of public roads, but this is no longer allowed.

To cut the story short the dam was breached by the contractor and water flooded down the drive.

The beavers began immediately to rebuild this dam, providing a great opportunity for my trail camera. 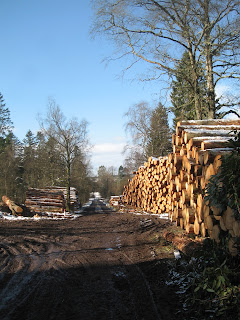 At the same time the contractor started to fell timber and stack it by the side of the drive, some of it blocking the old culvert at the lowest blue blob on the satellite photo. The beavers responded to the flow of water that now ran down the west side of the drive by damming it. Eventually, the topography of the land demanded that the water flow across the drive and the beavers began to dam the drive itself. 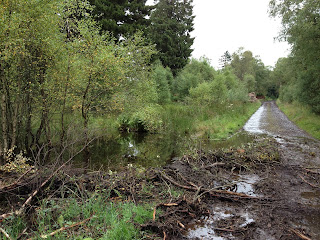 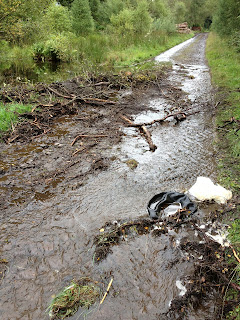 All this during a very wet summer: in due course all the timber was removed and the blocked culvert was cleared.

In December 2012 heavy falls of rain caused the barrage that closes the ponds to the east of the drive to overflow. This caused flooding in the cellar of the gate lodge (to distinguish it from the beaver lodges) at the southern end of the drive. Heavy (relatively speaking) snow in conditions of thaw caused more flooding in January. We arranged for a digger to come and clear a ditch just north of the lodge. This has cured the problem for the time being, but we need still to do some work on the water levels upstream. 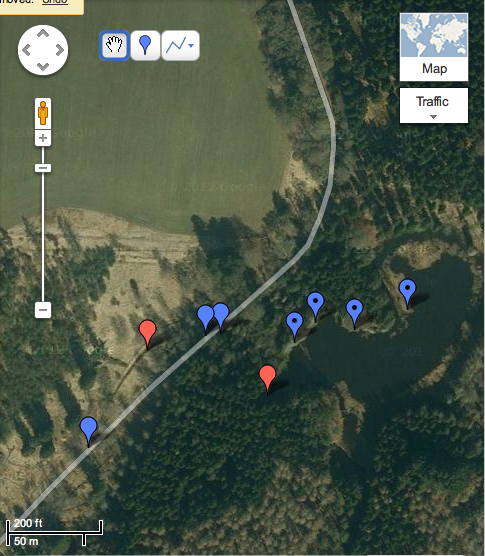 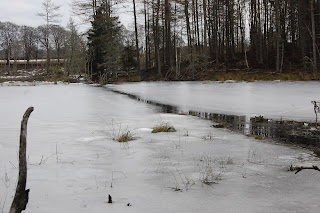 This photograph, looking roughly east across the main pond, shows where beavers are keeping the water open as they swim back and forth. It was taken from the furthest right of the blue blobs. 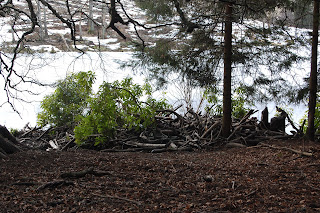 One of the lodges is shown by the blue blob, second from the right on the satellite photo. 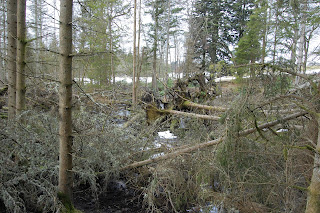 Large woody debris in prone, vertical and angular states, seen from the barrage that closes these ponds. 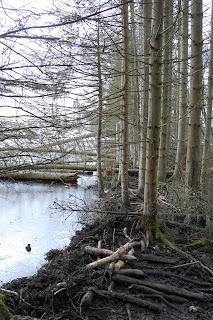 The barrage that created these ponds was built in the 1890s, I think. It was planted during the 1950s with Norway Spruce, whose rooting systems have been drowned by the raising of the water level brought about by the beavers. 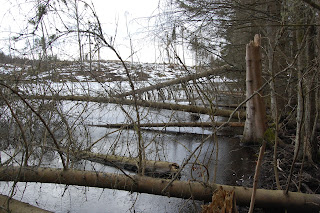 A few metres on. The dead trees, infested by wood boring wasps, have snapped in the wind rather than been upended on their roots. 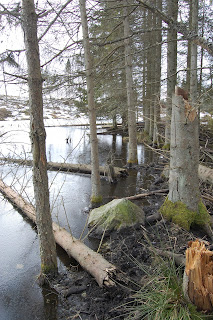 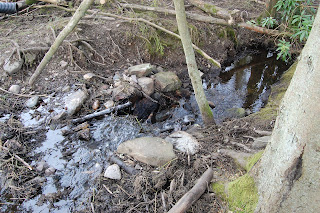 The sluice for the barrage is at its southern end. Since 2002 the beavers have kept it dammed. 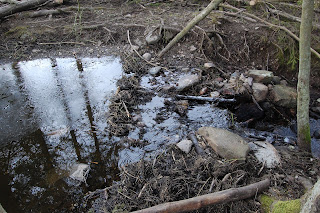 During the various recent attempts to lower water levels a notch was made in the dammed part of the sluice, releasing a great deal of water. As you can see, beavers have been back to repair the damage done to their work by humans.

The last two photographs are roughly where the right of the two red blobs is place on the Google image. 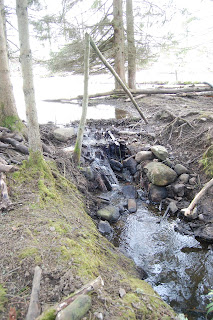 The sluice from downstream. 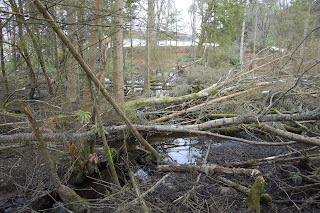 Looking downstream from the area of the sluice across the swamp. 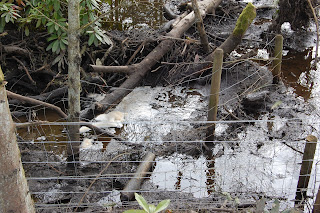 This photo shows a small enclosure, almost a primitive attempt at a 'beaver deceiver', which marks the entrance to a culvert that goes under the drive. The beavers never tried to block this culvert, so far as I am aware, but raised water levels from the dams downstream made this unnecessary.

The right of the two clear blue blobs marks this on the Google map. 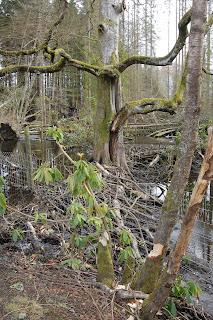 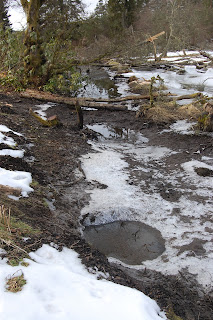 The culvert's outlet is marked by the hole in the ice nearest the camera. There is another hole some yards on and the clear water beyond the felled birch tree marks the beginning of a deeply dug ditch with embankments. The left of the two clear blue blobs marks the emerging place of the culvert. 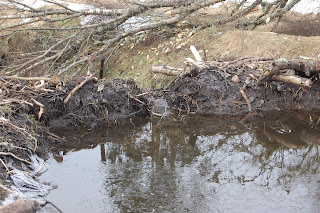 This is the top dam of that big ditch. A notch has been made in the middle of the dam and the water level has been considerably reduced. Should this be the place for a pond levelling pipe and cage to be installed? 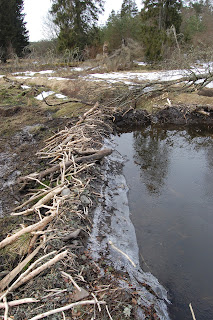 The east side of the dam runs along the bank of the embanked ditch. You may be able to make out the notched bit of the dam that appeared in the previous photo. 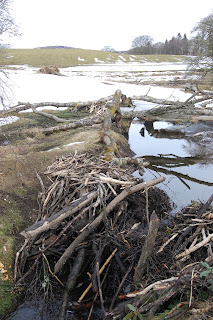 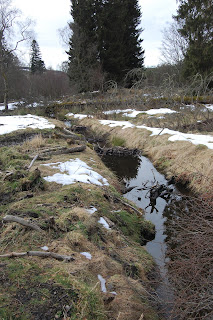 A flight of small dams controls the water as it runs south along the ditch. 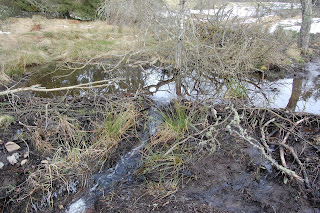 A small dam filters the water where the embankment has ceased. 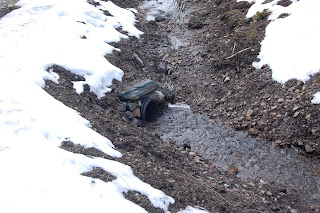 The old stone culvert was intact, though somewhat silted, and lengths of plastic pipe were inserted at the inlet and outlet last summer. 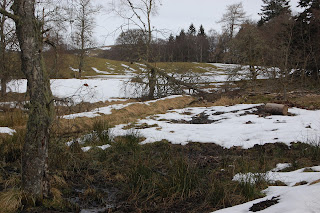 This photo shows the line of the embanked ditch. The Google image shows it too if you look for it.

This is our first big attempt at mitigating the impact of beavers. It will be interesting to see how it goes.

In this situation the combination of wet weather through the summers of 2011, 2012, wet winters in both those years, coupled with timber operations, and the work of the beavers have brought about a situation that we need to manage.