The interview in the current 'New Scientist' of Dekila Chungyalpa, director of the WWF's new Sacred Earth programme (http://www.newscientist.com/article/mg21729020.200-faith-leaders-belong-at-the-forefront-of-conservation.html?) reminded me that the State of the Beaver Conference started with a welcome from the Cow Creek Band of the Umpqua Indians, part of which included a prayer for the success of the conference.

The reminder that many Indian groups have survived the last hundreds of years of expropriation, even though sometimes without their language as is the case of the Cow Creek Band, was fascinating to us. It was particularly good to learn of this Band's enthusiasm for the restoration of beavers in water conservation and the recovery of salmon in the Pacific North-West.

We left the conference and stayed a night in Florence, after which we drove along the coast to the cave shown below. 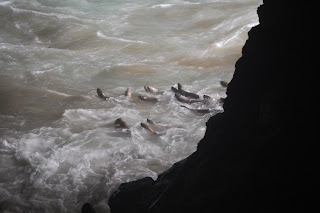 This is a magnificent place, reached by an elevator (though in this case you descend to the cave), where Californian sea lions spend time resting on the rocks or swimming in the surf. The photograph shows a group of females battling with the waves as they rush into the cave. The males swim up to the Arctic at this time of year, we were told. The cave has a tremendous smell of fresh fish. 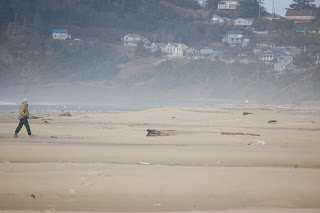 Our next stop was Newport. We booked in to a hotel and went for a walk along the beach. It was interesting to see the great amount of tree trunks that littered the beach, something that reminded me of  Chris Maser's book 'From the Forest to the Sea—A Story of Fallen Trees' (1988). Compared with many beaches in Scotland there was surprisingly little plastic rubbish.

As we drove along we noticed a sign to Beaver Creek, a state natural area. Stopping on the way to ask for directions from a woodman who was servicing his chain saw, we learned that there were no beavers in the area now. He claimed that farmers had killed them. However, the Google entry for the site stated that there are beavers around. Who is right? Our local informant or the Oregon Fish and Wildlife Service? http://www.oregonstateparks.org/park_261.php 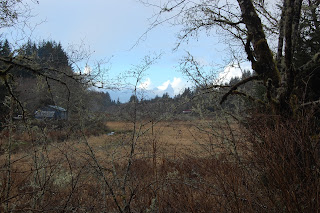 At the lower level, the area was mainly wetland, but as we walked up the track open meadows became a feature of the forest landscape. It was clear from fresh droppings that there were many elk about (red deer to us) about. Our woodman had said that we could well see them, if we were around at dusk. 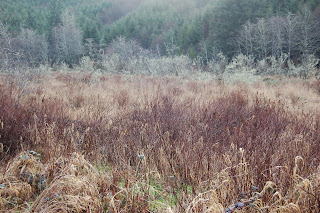 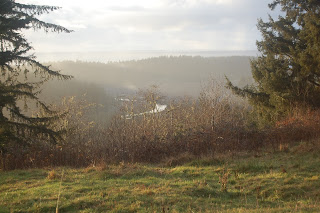 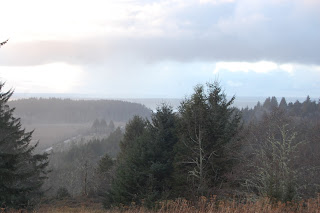 You can see the Pacific Ocean in the distance. What was that about Stout Cortes on a peak in Darien? 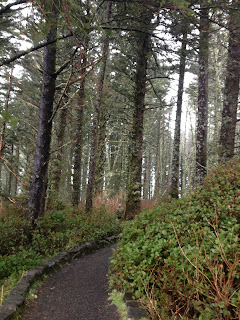 Anyhow, remembering our visit to the beach at Newport with all those fallen trees, here are some standing trees at Cape Perpetua, which is part of the Siuslaw National Forest. It was wonderful to see  Sitka spruces, Douglas firs and Western Hemlocks in their native environment. I have googled the place since returning home and found that a particular Sitka there is known to be six hundred years old.  No doubt a number of others are just as old but did not have cores taken from them to prove it. I don't think the cored one was one of the giants that we saw, but they were impressive enough for us. 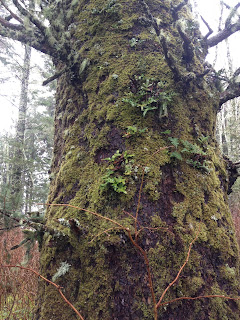 It was extraordinary to see these giant covered with mosses, lichens and ferns. How wretched our plantations look in comparison with these real forests! 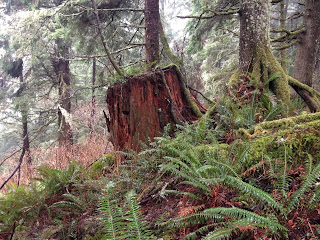 There were stumps of some giants. In some cases these stumps had young trees growing from them as in the picture below. 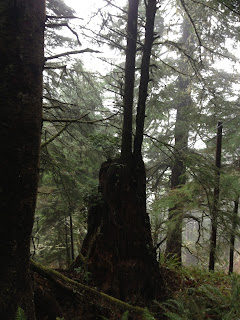 After our visit to Cape Perpetua we made our way up the Siuslaw valley, where some fishermen were out in the mist and rain, probably fishing for steelhead trout - the anadromous version of the rainbow trout (Oncorhynchus mykiss). I learned this last piece for information from Paul Jameson in Blairgowrie since getting home.


After Corvallis we joined the Interstate 5 and drove North through the rain to Portland where we spent a pleasant evening in a noisy but fashionable restaurant called Clyde Common. Then, the next morning, we rose at the usual absurdly early time for catching planes, passed through security, and were admitted to the departure gateway to the wait for the plane. There we engaged in conversation with a young woman whose surname is Cargill. We told her that the place name from which her name derives is in Perthshire and then, consulting google realised that the 17th Century covenanter, Donald Cargill (from whom her father claimed descent so she told us), came from Rattray, even nearer home. 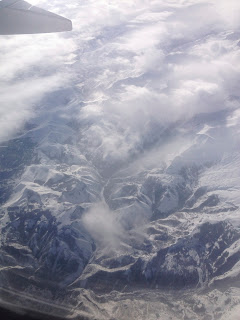 In due course we took off: here we are flying over the Rockies, I should think. By this time Louise was into a conversation with a lady banker. I concentrated on Anna Karenina, while listening from time to time to possible pressure points in the conversation.

Levin was turned down by Kitty Scherbatsky and had returned to his estate. In the meantime my neighbours had agreed that the politicians were as much or more to blame than the bankers. Clinton had started the rot (she had not heard of the John Fortune and Bird interview of 2008 http://www.blogger.com/blogger.g?blogID=3695196655254960724#editor/target=post;postID=7461947344977900382) and our banking companion was not an admirer of President Obama. However, she did share her peanuts with us and that was something.

We arrived in Newark, caught our connection for Edinburgh, landed there early on the morning of the 29th and arrived home to find a great deal of snow and tales of heroic deeds.