The State of the Beaver Conference, Oregon

The first announcement that the State of the Beaver conference would be held in 2013 was published some time last summer. Louise and I were excited to be asked to speak at it, Louise as keynote speaker at the conference dinner, and I at one of the daytime sessions. In due course we prepared our presentations, Louise in good time, and I closer to the beginning of the conference than I should have.

Christmas  2012 passed and the New Year 2013. The weather changed from rainy to snowy. Then the forecasts began to predict heavy snow. Would we get to Oregon, or not? 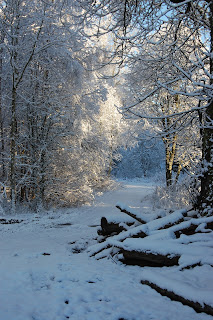 Snow fell and I realised, looking at the weather forecast, that much more was predicted. We decided to drive to Edinburgh the day before our early flight on the 22nd January, packed and set off.

We arrived at Portland (PDX in airport lingo) rather late as a result of delays at Newark. Coming in to land at Newark is an extraordinary experience. In the East lies Manhatten, silhouetted against the Atlantic sky: between it and the airport is a vast urban desolation of concrete and fences: huge parks full of containers, trucks and every kind of industrial process.

Eventually we took off for Portland and watched the bright lights of the east coast conurbation disappear in the darkness.

After a comfortable night in a hotel at Salem we drove on to Canyonville and the Seven Feathers Casino, hotel and conference centre in time to register and prepare ourselves. 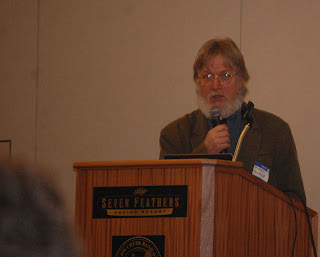 Stanley Petrowski presided as  master of ceremonies. Here he is welcoming us to the conference. It was great to renew acquaintanceships and friendships started two years ago: wonderful to meet so many people who have  been such a support to our campaign for the beavers of the Tay. Because the beaver is protected in so much of Europe there is, generally speaking, less need for the kind of advocacy and campaigning that is  surprisingly still necessary in the USA. We enjoyed many conversations with people, such as Kent Woodruff of the Methow Valley Relocation Project, who had come across similar difficulties and challenges to ours.

Mike Callahan of Beaver Solutions in Massachussetts was present and generously giving out copies of his DVD on how to instal pond levellers and other devices to mitigate flooding that beavers may cause. 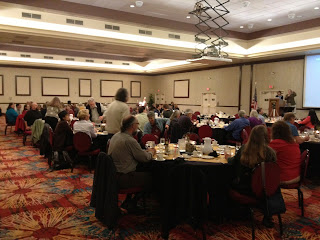 On the evening of the second day of the conference we attended the dinner, a splendid affair with Louise as guest speaker. You can see her in the distance with Stan, setting up her computer before the party got under way.

The speech, by the way, was very well received not least, it being Burns' Nicht, for the quotation from one of the Bard's less well known songs, 'Cock up your Beaver'.
Here is a link to Heidi Perryman's take on the conference: 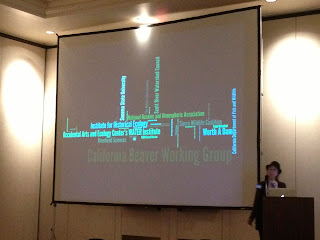 On the third day Kate Lundquist from the California Beaver Working Group gave a talk and used this slide, a concrete poem by the look of it, to illustrate a point.

The standard of presentations was very high, so I am very much looking forward to the publication of the proceedings in order to remind me of what we listened to and looked at.

A great part of the interest of the conference was in the diversity of the talks given. There were strictly scientific papers, such as those of Michael Pollock http://www.awra.org/proceedings/Summer2012/Riparian/doc/abs/MichaelPollock_d913a6db_8133.pdfand Rachel Malison (http://www.rmalison.com/research.html) and then there were the advocacy or campaigning talks of which Heidi's brilliant and rousing account of the Martinez beavers was a fine example. I should also mention Ann Chamberlain and Cindy Haws' excellent joint presentation on the last morning of the conference.

Paul Henson of the United States Fish and Wildlife Service spoke about the beaver as a surrogate species. I had never heard this term before, but it seems to cover similar ground to the term 'keystone species'. http://www.fws.gov/landscape-conservation/surrogate-species-faqs.html.

If the beaver is adopted as a surrogate species in US conservation policy that will be an important step in its conservation. Let us hope!


I became aware of the work being done by the Grand Canyon Trust for beaver restoration at the State of the Beaver Conference in 2011. Mary O'Brien spoke about developments in this. http://etal.usu.edu/ICRRR/Beaver/2012/UWCC/BRAT_WMacfarlane_short.pdf
I remember being much excited by the photographs of green, lush vegetation growing on the banks of the creeks in Utah, where only desert had prevailed before the beavers came.

This is just a flavour of the many interesting presentations that were given at the State of the Beaver Conference. One of the most interesting aspects of the whole enterprise for us was the involvement and support for the conference given by the Cow Creek Band of the Umpqua Indians. 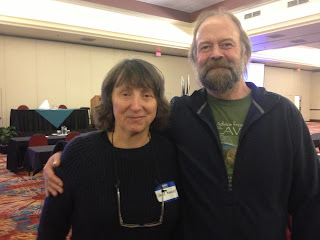 Here is a photograph of Leonard Houston, one of the chief organisers of the conference, with Louise when we said our good-byes. Leonard gave a characteristically eloquent speech of introduction to the proceedings.