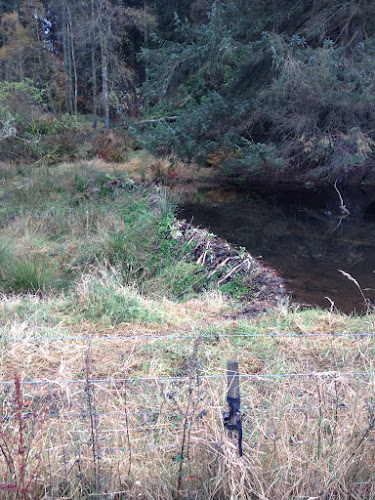 Back to GMT, or is it forward into the dark of winter? Golden October is still with us - just, or am I about to sound like the Vicar of St.Albion's?

The above is the Second Dam on the Burnieshed Burn at Bamff. There was little sign of activity along this stretch of the rewilding ditch after the death of the female in May. Things have changed in the last fortnight or so: the dam in the photograph has been decorated with fronds of rhododendron and strengthened with branches of stripped birch. 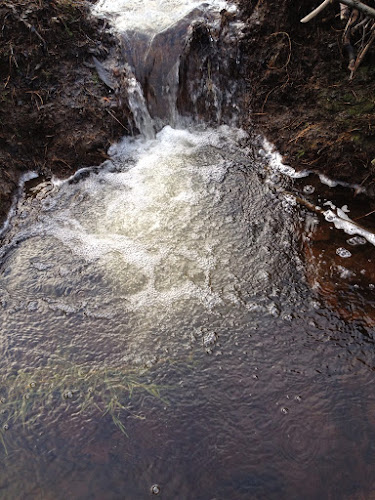 There are no signs of attempts to rebuild the breach in the Third Dam so far. The plunge pool below the dam is about two feet (300mm) deep. 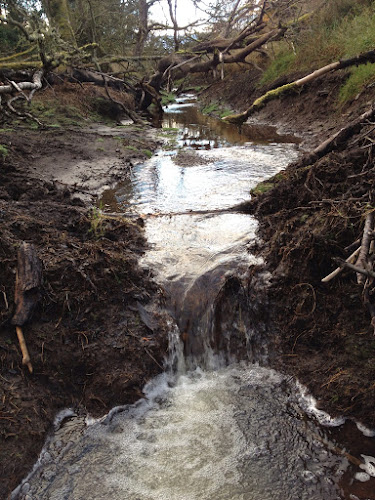 Here is the ditch with its lowered water level. Note the abundance of dead wood.

Just to change the subject: here is a link to a paper in the Journal of Hydrology:

The title of this paper is:

'Effect of beaver dams on the hydrology of small mountain streams: Examplefrom the Chevral in the Ourthe Orientale basin, Ardennes, Belgium'

I mentioned it in a post last March, but forgot about it until today. The question of the effect of beaver dams as moderators of floods was raised recently in Bavaria. It seemed that on the scale of a whole landscape there was little effect mainly because the farmers would not allow enough rivers to be dammed to the necessary extent. The Belgian work, however, confirms that, at the level described, there is a definite effect.


'Why Beavers Survived in the 19th Century' http://www.innovations-report.com/html/reports/environment_sciences/report-34906.html is interesting.


'Russian scientists give an explanation for the wonder of beaver survival throughout the 19th century, when these animals were badly endangered and lived in conditions that would be fatal for another mammalian species.

A population of beavers can survive, if it includes only three animals living together. Such a small size of viable population is explained by the genetic adaptation of beavers to inbreeding. Beaver genome and behaviour account for an outstanding viability of this species, as is established by A.N. Milishnikov and his colleagues from the Severtsov Institute of Ecology and Evolution in Moscow.'


Isn't that interesting? What do people think?


The next International Beaver Symposium (2015) is to be at Voronezh in Russia. The thought of travelling so far seems a bit daunting, but the Russian experience sounds most interesting. Anyhow, they made a very strong pitch to host the symposium.