A Dam and a Canal

Now here is a thing. Every time I have tried to write a new post from my laptop an error message has appeared and I have been told to report it to blogger support. No doubt something will happen and the error will be cured.

In the meantime, attracted like a moth to a flame to new ways of doing things, I have downloaded Blogsy on to my iPad and am hoping to post.

As I write a little wheel is whirling round and I am hoping that a photogrqph of a canal dug by beavers will become manifest on the screen. And so it has!

The middle dam along the Burnieshed has attracted attention recently. It has been decorated with rhododendron branches, a overflow has been built and a canal has been dug at its southern end. This new canal, along with the now filtered overflow, has made an important contribution to the rebraiding of the burn.

I must remember to take my good camera with me when I go to feed the wild boar tomorrow.

In the meantime here is a photograph I took about a fortnight ago of a canal in the Wet Wood. 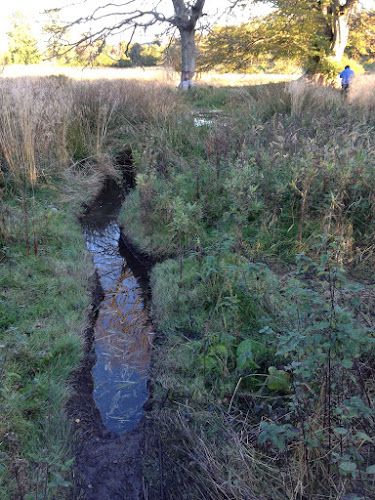 Posted with Blogsy
Posted by Paul Ramsay at 21:11