A Visit to the Scottish Game Fair

On Sunday morning, after briefing Adam on the feeding of the wildboar, Louise and I set off for the Game Fair at Scone.
We parked among the splendid oaks in the parkland that surrounds Scone Palace and walked with the crowd of people who, like us, were going for a jaunt to the fair. A pipe band was playing as we arrived and the commentator was speaking about the great intelligence of the Border Collie. A moment later we came upon the main ring and there was a collie herding some indignant looking white geese.
Next we happened upon the main exhibition of the Game and Wildlife Conservation Trust. It was called 'The Good, the Bad and the Ugly'. In one tent there was a display entitled 'Fox Midden'. A heap of bits of skull and skeleton and other animal remains was surrounded by four traps. This set up is an effective way of luring foxes into traps.
This exhibit seemed to me to set the scene for the Game and Wildlife Conservancy's approach to wildlife and ecology. Good is what you preserve until you and your friends want to kill it. Bad is anything that may compete with you for this pleasure. Wading birds are a useful decoy: by protecting them from their enemies you protect the Good birds that you plan to shoot in due course and demonstrate to the foolish birdy folk that you are a wise manager with the interests of biodiversity at heart (which, oddly enough, may sometimes be true). Ugly seems incidental, but I thought that the whole exhibition was Ugly. 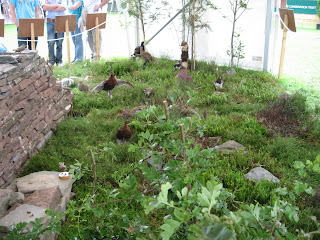 The other display consisted of a backdrop of simulated moorland with a length of dry-stone wall. Perched and placed among this were stuffed representatives of the Good (Red and Black Grouse) and the Bad, which included a goshawk, sparrow-hawk, raven, buzzard and pine marten.
There were placards to explain the importance of keepering and to describe the Bad creatures. In the case of some of these it was noted that they were protected by law. Readers could draw their own conclusions as to the absurdity of protecting these Bad creatures from their just desserts at the hands of a worthy gamekeeper. 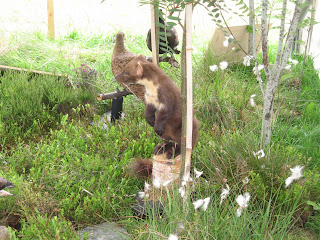 A stuffed pine marten (Martes martes). This species, which was driven to the edge of extinction in the British Isles by the first half of the twentieth century, has recovered remarkably and is now increasingly an object of the game preserver's ire. It is one of the Bad creatures that is protected by law. 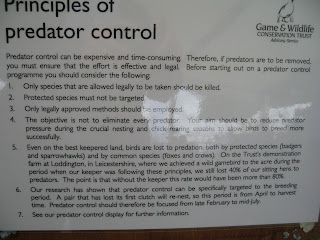 On one placard it was noted that the intention of keepering was not to eliminate all predators, but just to keep their numbers down. I remember this idea well: NIMBY.
Nevertheless, I met several people whom I was glad to see (Dominic Wedderburn, John Bruce, Andrew Dingwall-Fordyce, Bob Macintosh, Karen Everett, John Ferguson and his family, Jill of the Woodland Trust and then, Harry Wilson from RTS) and so the time I passed at the Game Fair was well spent, not least because it encouraged me to google:
http://www.gwct.org.uk/this morning , where I found this fascinating piece about the possible return of the beaver toEngland:
http://www.gwct.org.uk/policy/wildlife_issues/1422.asp.
This, in turn, took me to the English Nature website, where I found the report that was referred to in the Game Conservancy's piece:
http://naturalengland.etraderstores.com/naturalenglandshop/product.aspx?ProductID=0228d212-15d7-41bf-8152-047585ec0941.
How interesting! I should be very grateful for any comments on the Natural England paper, particularly the review of the legal position 'Beaver reintroductions to England: the
legal position by Tony Mitchell-Jones, Natural England'.
Posted by Paul Ramsay at 11:49