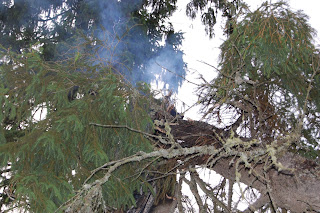 Thunder storms had been around for some days, but I was unprepared for the violence that broke upon us on Monday. The storm burst overhead, so close that the lightning strike and following clap of thunder happened at the same time. I was driving to collect potatoes for the wildboar when a huge bang sounded overhead. A few yards later and another crashed so close that I ducked involuntarily. Rain fell torrentially. Here is a photograph I took of the Norway spruce that was struck and caught fire (of which more below). 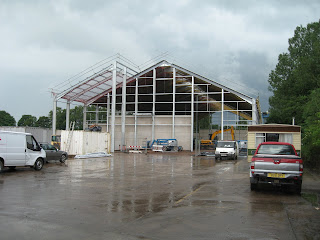 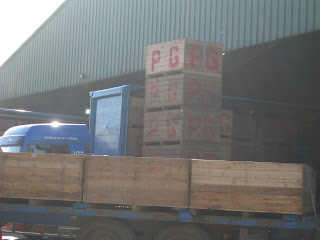 Peter Grewar's establishment at Ardler was itself a storm of activity. A vast new potato store was being erected and great articulated lorries were being loaded at speed by skilful fork-lift drivers.
On my return I found a message on my telephone. My neighbour, Cameron Murray, had rung to let me know something about a broken tree on the hill behind us. I couldn't make out exactly what he said, but clearly it was something abnormal. Abnormal, I thought but not urgent, so I continued with my work until the telephone rang and another neighbour, John Ferguson, told me that one of the old pine trees was on fire. 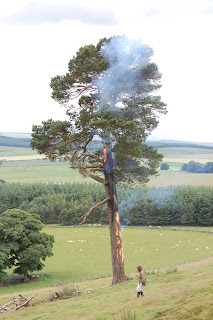 With that, Louise and I climbed into our truck and drove up to inspect this wonder. 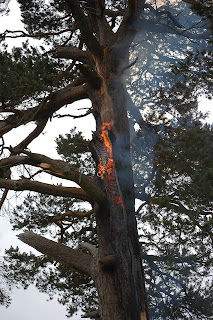 Hardly had I stopped photographing the pine tree (Pinus sylvestris), when I noticed a plume of smoke rising from our house. A chimney fire, perhaps, or could it be that an electrical fault caused by the thunderstorm had ignited the timbers in the roof? 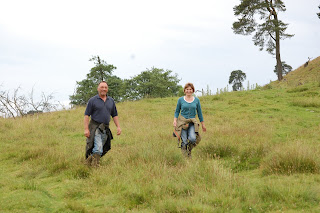 Pausing only to ring for the Fire Brigade and to photograph and shout greetings to Peter and Catherine Hall, neighbours who had walked over from Balwhyme to look at the burning tree, we drove as quickly as the ground allowed back down to our house. 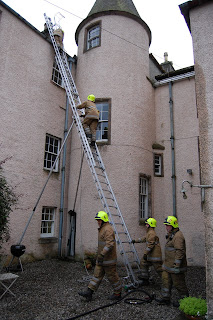 Luckily, the Alyth Fire Brigade arrived very quickly, the chimney fire had subsided (it had started when someone was lighting a fire in one of the flats), and all was well. We felt intensely grateful to the Fire Brigade. In the past we used to recognise members of the crew, but this time I realised that it was the sons of our contemporaries who had become firemen. I am thinking of Scott Buick and Graham Davidson.
The Fire Brigade had only just left when the telephone rang and Peter Hall asked me if I had seen another burning tree, this time on the drive.
I drove down to look and found the Norway Spruce (Picea abies) in the first picture of this post smoldering. The long grass round the base of the tree was thoroughly wet, so it seemed safe enough to leave it to burn itself out. 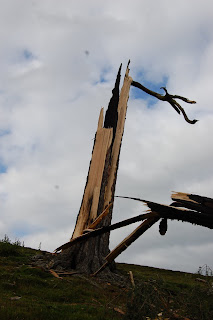 Yesterday afternoon we returned to the Hill to look at the Burnt Tree. All thought that the tree might survive as a living shell were dispelled. The top of the tree had fallen off and the remainder is dead.
The second photograph shows the inside of the lower part of the bole of the pine. 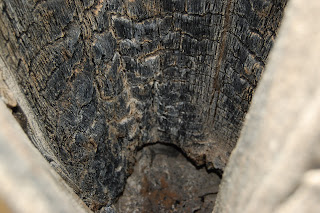