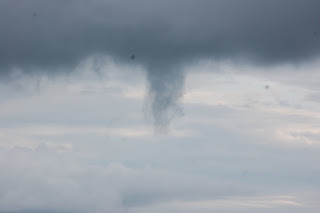 The thunder and lightning of yesterday morning's storms gave way to a showery afternoon with clear spells as the meteorological folk like to say. Time for a walk along the Dean Water, I thought, and prepared to head down there.
After looking at a map, I decided to start my walk at Harryhill, which looked like an old fashioned farm steading. When I reached the place, however, it turned out that whatever there had been of a steading and farm yard had been turned into a housing development. This one had a great pair of pillars with imposing concrete spheres on top to give the impression of a gated community. It seemed to me that this curious Urbs in rure, or Suburbs was an intriguing descendant in contemporary terms of the medieval settlement that may have been the original Harryhill.
Walking in a countryside of intensive agriculture is not always straightforward. The wanderer must stick to the edges of fields and these may be very uneven. On one side of the walker lie the forbidden crops, on the other hidden obstacles under the profusion of summer vegetation.
I left my truck and set off. Rounding the new settlement, I found myself looking north towards the hills above Strathmore. Cat Law dominated the background, while in the middleground I could see the farm of Simprim. A little to the west is the site of the Roman marching camp, built when Agricola's successor, Sallustius Lucullus, led an expeditionary force through this country around AD85.
Someone had cut a path through the grass, roughly in the direction I wished to take, so I followed that until I realised that I was heading too much to the East. Bumblebees and other insects caught my attention as they foraged among some ragwort (Senecio jacobaea). 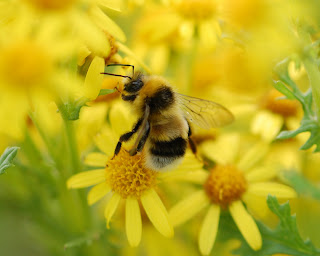 Walking on, I came to a nearly overgrown metal gate, beyond which a large delapidated looking pipe crossed the Dean Water. I think this must have been an old aqueduct that took water from Lintrathen Loch to Dundee. My GPS reminded me that I had made a waymark at this point on the day, some weeks ago, when I canoed down the river. 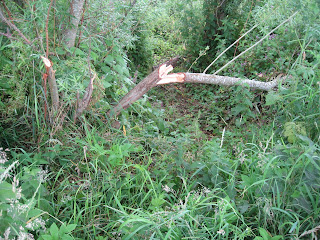 A few hundred yards further on I came across my first sign of the presence of beavers: a couple of gnawed willow trees and a path that led down to the water. 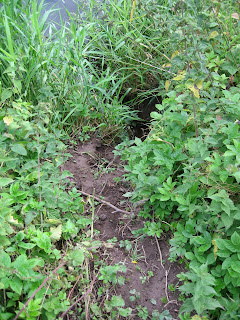 The path led steeply down to the water: towards the end becoming sheer. I am used to the ability of beavers to climb up the trunks of fallen trees, but was struck by the steep lower bank that they must scramble up in order to reach the willow trees at the top. 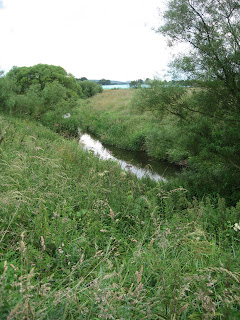 This photograph looks towards the polytunnels that I have shown previously in this blog. 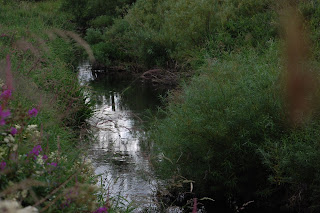 Some minutes later I reached the place where I intended to watch and wait in the evening. The banks of the Dean Water are very steep for the most part and in this section covered with willow herb (Epilobium angustifolium) and meadow sweet (Filipendula ulmaria), not to speak of nettles, thistles and various grasses. Willowherb and meadowsweet are great favourites of bumblebees, which puts me in mind of the association that Bernd Heinrich describes so well (in 'Bumblebee Economics') between bumblebees and places that beavers like to inhabit. 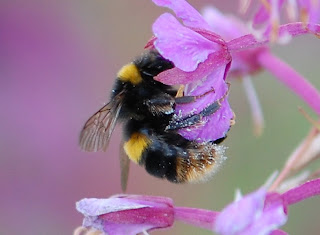 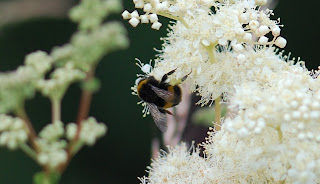 Having carried out my reconnaissance I made my way back to Harryhill and so home. 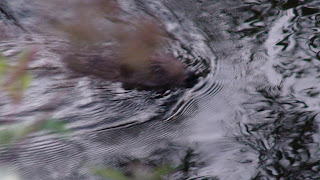 Later, in the evening, I returned, walked to my watching place and was rewarded.
I took the picture on the left with the camcorder in its still photograph mode.
Blogger won't let me upload video clips at the moment, so I must refer you to Youtube for a clip of a kit.