Time for a Catch Up

It has got to be time for a catchup after months of silence. Here is my current offering to 'The Alyth Voice'

A Couple of Short Walks in Late Winter
Coronavirus… well, let’s give it a break and go for a walk. My default route is by the Burnieshead path, and then up and through the Tay Bridge Wood. I note, as always this winter, the abundance of cut and stripped stems of birch saplings, piled up against the high dam. These young birch have come from the regeneration on the bank above the burn. In late winter (early spring) when there are so few signs of new growth these fellings can look a bit extreme.  However, Spring is on her way. The coppiced saplings will push out new shoots in May, eventually to create a thick, branchy scrub, habitat for the insect life that goes with it. Warblers will rejoice.

Turning right to leave the path I climb the bank and walk in to the Tay Bridge Wood. Fourteen days into March, the stripped cones of Norway spruce are accumulating on the floor of the plantation. The squirrels are wearing through the winter stores, but there are still plenty on the trees. I see a cone stuck upright in the ground. A squirrel has raised it from the prone position. Is it easier for the squirrel to grapple with the cone upright to strip it of its seeds and eat them? But why did the squirrel leave that cone? A pine martin, a human, the shadow of a buzzard flying overhead?

Another day and I am walking along the bank of the main ditch. The winter storms have done much to rework the burn. New side channels, dug earlier by beavers, are now taking a share of the water that used to flow headlong down the straight, main channel. Sediments that used to lie on the channel floor of the burn have been swept on to leave a bed of coarse gravels and cobbles, habitat for young trout. Further downstream, where the water level has dropped since the latest floods passed through, and the current slows, these fine sediments have accumulated on the bank. Looking at the sediments I notice the foot marks of a small bird and pinpricks in the mud. What can have made these? The muddy bank makes me wonder if eels will return to these places one day.

A bird rises from the ground just ahead of me. I am still puzzling over its identity when another rises from the rushes. I get a clearer sight of the creature. It looks like a snipe, but smaller, and doesn’t make that ‘crick crick’ call at take off: jacksnipe, the two of them, I realise. I stand and watch for a moment before heading on again. Later, it occurs to me that those pinpricks in the mud were the work of the just disturbed jack snipe. The birds were using their beaks to probe the mud for food. They must be on migration, heading back to breed in Sweden, Finland and Russia after wintering with us, like the flocks of greylag on their way to Iceland.

Spring is with us. I know because I heard the chorus of the frogs over in the Beaver Swamp. Some years ago I managed to get some photos with which I was pleased of the creatures.

The wet winter has resulted in the amazing expansion of waterways through the swamp. Walking about yesterday I took a few photos of things that struck me. 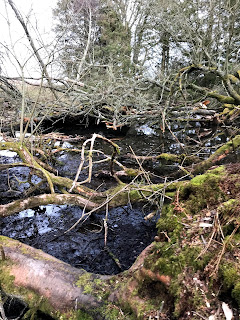 Magnificent works on the north side of the Beaver Swamp 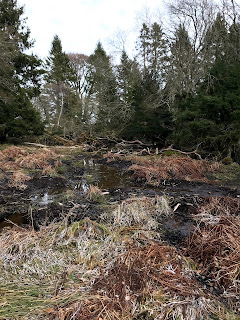 Another view of this growing swamp. 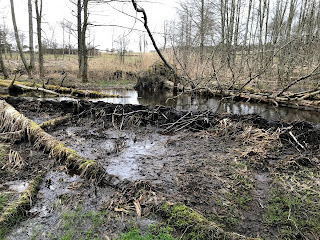 I was surprised by this new dam, beautifully plastered with mud. 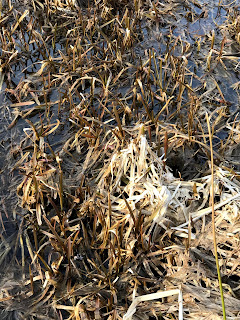 The first shoots of sweet reed grass (Glyceria maxima) - a fresh bite to cheer the beavers, water voles and other herbivores. 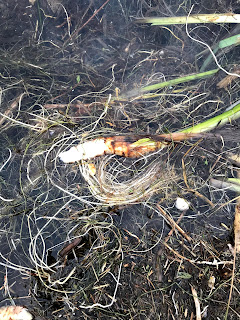