Black Darters and an Archaeological Visit 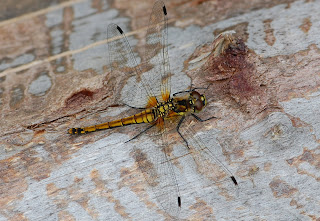 When John Thorpe first came to visit Bamff, he asked me if I had noticed whether dragonflies were more abundant since the arrival of the beavers in 2002. I replied that I hadn't noticed any change then but, later that summer, came across a whole lot of black darters (Sympetrum danae). I didn't notice any of these dragonflies last year, but have seen some by the pools of the Burnieshed burn in the last ten days. Here is one lying out sunning itself on the bark-stripped trunk of a birch tree that the beavers felled last winter. It seems that these darters like to lie out in rows, warming them selves in the sun.
On the 31st July I had a very pleasant visit from Nick Dixon and Barrie Andrian from the Scottish Trust for Underwater Archaeology. I attended a meeting of the Scottish Freshwater Group in 2009 at which Dr. Dixon spoke most interestingly about the discovery of ancient woodland in what is now a submerged part of Loch Tay. Among the remains of the woodland they found a dam built by beavers.
Here is a description of their work taken from their website
www.crannog.co.uk/docs/whats_new/ArchiveNews.html :
'The remains of ancient oak, pine, and alder trees embedded in the shallows of the loch below Ben Lawers were first discovered in 2005 during work carried out by the Scottish Trust for Underwater Archaeology (STUA) for the National Trust for Scotland’s Ben Lawers Historic Landscape Project. Initial radiocarbon-dated samples placed the submerged tree remains in the Neolithic period more than 4,000 years ago, but further dating has revealed the timbers range between 1,500 and 8,000 years old.'
And
'With support from Historic Scotland, underwater archaeologists from the STUA and the Scottish Crannog Centre at Kenmore have returned to the area to try to determine the origins of the tree remains, possible causes for their inundation, and any evidence of human activity. Last year charred grain was found in a sample collected from deposits one metre below the lochbed. Given previous discoveries of Neolithic stone axes nearby on land and the proximity of Scotland’s only known stone axe factory near Killin, it is possible that further evidence will be preserved in the loch.
Now, in the course of searching for the root systems of one of the most upright stumps, the archaeologists have discovered upright and jumbled sticks buried up to one metre below the lochbed which have been gnawed and cut by beaver. Dr Nicholas Dixon, Chairman of the STUA and Research Fellow at Edinburgh niversity said “We were hoping to find timbers cut by early farmers using prehistoric tools; we never expected to find evidence of beaver activity. It will be exciting to date these finds – many of which have well-preserved teethmarks - and to try to establish if they represent the remains of a dam or lodge.”' 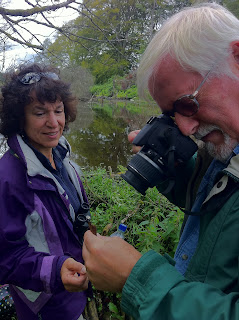 Here are Barrie Andrian and Nick Dixon photographing something that a present beaver has gnawed.
They kindly sent me the following photographs that show some of their underwater beaver gnawed finds. 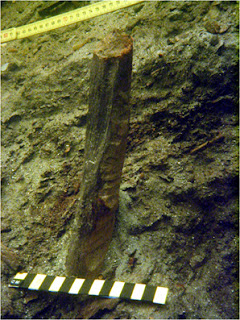 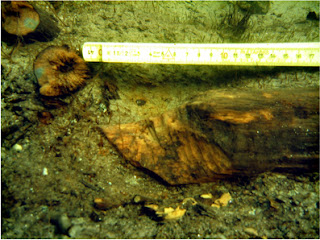 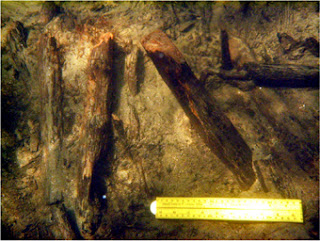 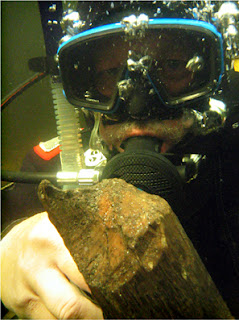