Once again Morgan has reminded me, as if he needed to, that there had been no post on this blog for more than a week.
What more can I say, except that we are going through a welcome thaw, thought the ice is exchanged for flooding. Here are some photographs of the dams in the Burnieshed burn at Bamff. 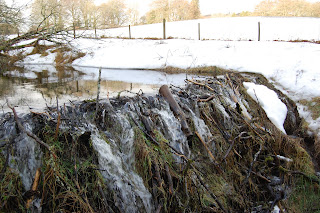 The lowest of the Big Three. An overspill to the left of the picture is carrying a lot of water and contributing greatly to the reconfiguring of this rewilding stream. 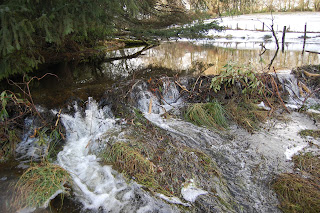 Here is that long middle dam. This, more than the others, has been draped with rhododendron. 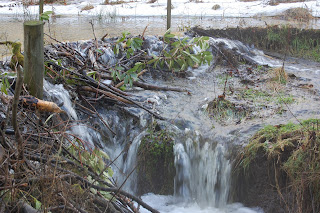 This is the first of the Big Three, looking at its northern end. The old fence straining post is more exposed than it was, but the dam has maintained its integrity, despite the volume of water behind it. 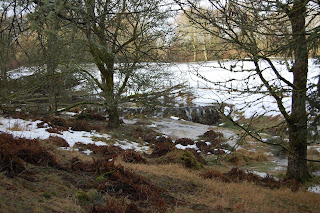 This photo shows the lowest of the Big Three from the path.
Felicity Martin asked how flooding affected beavers. The answer is that floods can affect beavers a lot. If the flood comes with enough warning they will make arrangements, move to higher burrows or shelters. The adults escort the young to places of safety.

In a sudden flood they may get caught and drowned inside their burrows, or washed away by the current. With any luck the animals will get out through a back entrance to the lodge or burrow and find some other shelter, or even build over the existing lodge. In places where floods are frequent, beavers may know of places that are safe in a time of flood.

The beaver that appeared in the Morton Lochs at Tentsmuir in Fife was probably washed down when the Tay was in flood. It was lucky in that it was able to find its way to shore and thus to Tentsmuir, though not so lucky in that it was trapped by the Royal Zoological Society of Scotland, taken to Edinburgh and then sent on to a wildlife centre in England, whence it escaped and is now thought to be living in the Thames.
Posted by Paul Ramsay at 20:35