Ethnic Cleansing of the Free Beavers of the Tay? 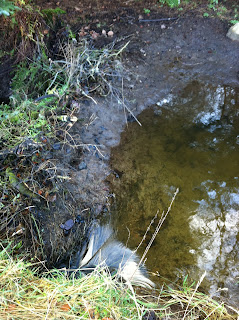 I took this first photograph yesterday morning during my daily round of feeding our wild boar. At first I thought that this little dam must have been partly burst in the recent heavy rains, but held together well enough for the main part to remain. However, looking at the photographs I took I have come to think that it is one of those cases where beavers have decided to regulate the water level and have done some digging to make this so. 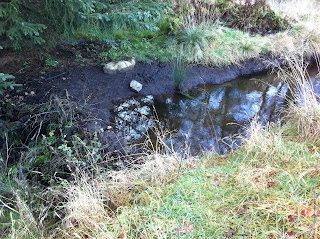 In this photograph you can see how much the water level has dropped in that section of the burn. 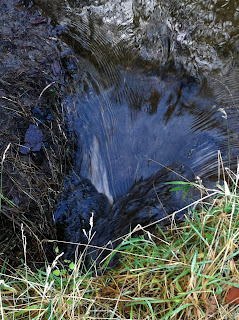 And here you can see that a channel has been dug in the side of the dam by the bank to act as the bypass outlet of the dam.
Now here is some astonishing news
I learned recently that Scottish Natural Heritage had commissioned the Scottish Agricultural Science's Agency to trap and remove the unlicensed beavers in the River Tay.
What an extraordinary move! It is true that the free beavers in the Tay have no licences from the Scottish Government to be there but, as I understand it, once re-established as a breeding population, they are covered by the protecting legislation of the European Union - the Habitats' Directive of 1992.
People must find it very odd that SNH are supporting a project in Knapdale in Argyll that is projected to cost around £2million of taxpayers, generous charitable bodies' and kindly individuals' money while, at the same time, commissioning the eradication of an accidental restoration that has cost no taxpayers' money.
I should say that I have always supported the SWT/RZSS project in Knapdale - I would support the return of the Eurasian beaver anywhere that was suitable.
How much will SNH spend on their misguided programme in the Tay? I think we should be told. Perhaps there is time for some common sense to intervene and Scottish Natural Heritage will call and end to this folly. 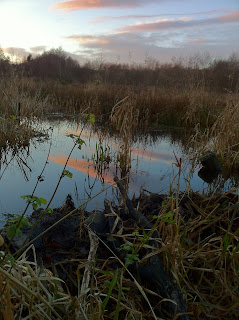 I took this last photograph yesterday afternoon a little after sundown. On the right of the photograph, above the dam, is that fence straining post. Here is a landscape that is both man made and wild.

Have you been watching Prof. Iain Stewart's brilliant series 'The Making of Scotland's Landscape'?
I watched the fourth one yesterday afternoon. You may find it at