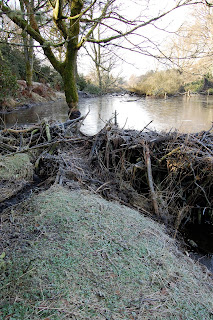 I posted these photos quite a while back. You can see the notch in the dam. It seems to have been built as an overflow, but it looks as though beavers and perhaps otters use it as a slide as well. 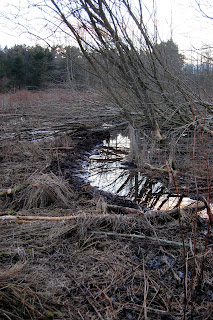 In the original enclosure there is a dam of about sixty metres length. The end of it has been turned into a canal. This is the short canal that skirts one of the exclosures that Kevin Jones built when he was doing his PhD here some years ago.
The idea was that the exclosure would stay and others would come and go on with some monitoring.
The beavers, however, have thought otherwise and broken into the exclosure. The willows in there are their reward. 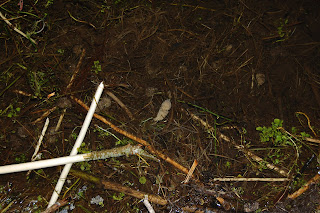 While looking at the southern end of the long dam I mentioned I found a lot of beaver droppings. Here is a photograph of one lot. You can see one or two floating. The rest are visible, but sunk.
Posted by Paul Ramsay at 17:37