Time for a Catch Up

Here is my contribution to 'The Alyth Voice' for August 2017

High summer! A brilliant day of sun with thermals to send buzzards soaring. Swifts fly screaming at altitude and the swallows dart out from their nests on endless sorties. Perhaps there is a second brood to raise?

Life moves on. There are new routines to adopt. Recently, and don’t tell the foxes, pine martens, badgers, stoats, pole cats and others who might be interested, we bought six pullets from Mrs Bruce at Woodside. Now they are here I have to alter my routine to include them in it. They must be shut into their house at night and let out by day to wander and forage through what was once a tennis court. They must be supplied with food and their water supply maintained. Well, that is one new responsibility. Luckily the world is full of people who know about poultry.

Next, a researcher has installed a notched weir and various devices with which to record the flow of water along the Burnieshead Burn. Unfortunately beavers react to the sound of flowing water by going to check where it is coming from. If the flow results from an overflow that they have made themselves they leave it, but if the flow is unauthorised, so to speak, they will do their best to block it. This is what they are doing with the researcher’s notched weir. What is he to do with the situation? The altered flow resulting from the beavers’ work will affect his data. A solution must be found. For the moment I have to visit the notched weir every day to remove the beaver’s efforts of the night before. Perhaps they will give up?

After clearing the notched weir one day I walked on, turned left over the bridge that used to carry the drive to the house, and took along the northern endrigg of the field called Dance Naked. I stopped half way along by the big beech tree that stands there, and looked in towards the burn. A substantial area had been cleared of nettles, dockens and thistles. Climbing over the fence, I went to look more closely: a path led from the top of the bank into the burn: a beaver had cut this clearing among the bankside vegetation. I was fascinated because I had thought that the animals avoided plants like nettles and thistles: clearly not. Beavers do create characteristic areas of lawn along the banks of water courses, but my impression has been that they graze the tender species and leave the more fibrous grasses. I left the bank and crossed the fence back into the field.

I trod on my way, reflecting on what I had just seen, when I noticed a detached foot on the ground. I looked more closely. It was the right hind paw of a beaver kit. What could have done this? A few paces on and I noticed the rest of the creature among the rushes by a canal. All that remained of the little animal was its tail, skin and a shoulder blade. Some beast had scrobbled the kit and consumed it. 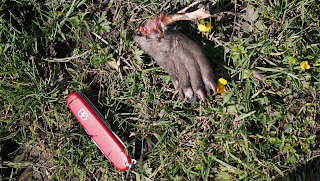 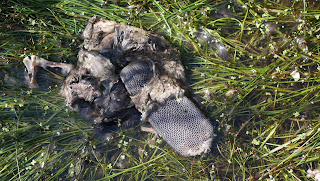 After their first six weeks of life, when their parents keep them safe in the lodge, beaver kits can become surprisingly bold. They seem keen to explore their surroundings, while their parents stand guard nearby, mostly. Perhaps something distracted the parents’ attention in this case? A careless moment is enough to allow the alert hunter its chance.

Otters are around, so my suspicions fell on that species, but perhaps a badger had caught the beaver, or a fox? A Belgian correspondent has told me that it could have been a wolf in his country. So it goes.

Here is my contribution to the AV for September:

A Cock and Six Pullets

As August heads into September the first hints of autumn are becoming apparent; a touch of colouring on the crowns of trees, heavy dew on the grass. The swifts have been gone since early in the month. The house martins and swallows fly in gathering masses to catch their insect prey and fatten on it before setting off for Sub-Saharan Africa.

The pullets I bought in July have started to lay and to make some points clear about their contract with me as custodian. They made it plain very soon after arrival that confinement to their pen was too restrictive. No amount of reminding them of the danger of predators would make them change their mind. Every day as I went to visit their pen they would rush to the door and push as I opened it. Eventually I gave in and allowed the six to rush out, bearing at the back of my mind the thought that I owed them a duty of care as their protector.

Once out they picked and pecked at the fresh blades of grass. They scratched at the ground with their feet. As the days have passed they have grown bolder and wander further afield. In the afternoon I round them up. Well, that gives you a rather inaccurate idea of what happens. I look around a hen-less landscape and wonder which of several species of predator will have enjoyed them. Perhaps it will be the fox I saw from our bedroom window recently, or the otter whose paw mark I saw by the burn yesterday? And there are pine martens and possibly polecats, not to speak of stoats and weasels. Then, all of a sudden, I hear the reassuring, conversational ‘toouck, toouck' of a hen. Two of the creatures have walked out of the undergrowth where they have been foraging. Soon most of them have come out into the open, curious to see what is going on.

An email arrived from friends in Argyll. They had bought a fine bantam cock for their hens and no longer needed the full sized beast they had on the strength at the time. At first I was unpersuaded: we didn’t need a cock for our hens. We were not planning to establish a breeding flock. Then, another email arrived.The cock in Argyll would face death if he could not be given away: an axe was at hand. Our friends would delay execution if we accepted the bird: they would drive him over to us. He was of a kindly disposition, would look after our hens and protect them from evil. He would even sacrifice himself rather than let his hens face death at the claws of a predator.

This was too much for me. I emailed back immediately that the cock must come to Bamff without delay. He would be granted full rights of residence as an asylum seeker in danger of his life.

The cock has turned out to be a splendid red gold specimen with iridescent green black tail feathers, which include a white one for good measure. Our friends told me that he had an exceptionally pleasant character, was very quiet, would only crow at dawn and then only for a short time. We drank tea and I listened while my friends extolled the cock.

What of the reality on day two of his presence? He wandered round the house all day, crowing quite often. When it came to rounding up the hens in the afternoon he had only two with him. Is this the future, I thought, am I condemned to an old age of rounding up hens every day from two hours before dusk? 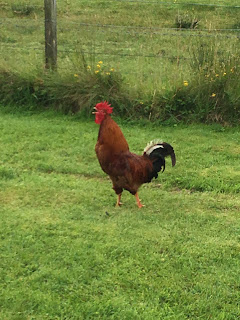 In the meantime our consumption of eggs has risen. Omelettes, scrambled, boiled, poached and fried eggs, mayonnaise, rum soufflé (still to cook).

This takes me to my last point: the poached egg. I have always consoled myself with the thought that the poached egg was an inferior fried egg. This was because I have never been able to cook one satisfactorily until now.  I would boil the water, break the egg into it and watch while the white spread through the water and seemed to curdle. Well, some months ago I heard on a radio programme that success with poached eggs depends on their freshness.

With our own eggs I could put this to the test; so I did. I chose two eggs that had been laid that morning. I followed instructions from the internet (http://www.jamieoliver.com/recipes/eggs-recipes/poached-eggs/) and ‘Presto!’ They were perfect. Of course super market eggs may be months old by the time they reach the kitchen, so it’s not surprising they don’t poach well. 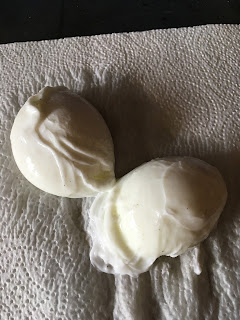