This is my piece for December's number of the Alyth Voice.

Rainy, mild November, I walk out of the house, glance around me and set off right, down the drive. Some big yellow leaves of the lime trees still hang, spare and bright against the dark background of damp, dripping trunks: others flutter sodden to the ground.

The pot holes are worse than ever: I must order more of the Type 1 from Collace.
Almost the worst stretch of the drive from the point of view of potholes is the bit under which the main ditch flows. Upstream, the burn has overflowed into the rushy wetland that forms its border. Downstream, the pool is full. The dam that makes this pool must be overflowing. I turn left to walk along the Burnieshed path and note that an apparently abandoned burrow has been reoccupied: fresh mud over the roof and newly laid branches and twigs tell me this is so. I walk on. Water is lipping over the brim of the dam and cascading down a spillway. No self respecting salmon would have a problem surmounting this dam, but then I wouldn't expect salmon here for this is trout water, both brown and sea trout.

I walk along the wetland below the path, crossing the moss and lichen covered trunks of fallen trees, and return to it after looking at an old birch, whose gnawed trunk reveals a great cavity within. This is the tree that bled sap in the summer on being gnawed, and sustained a family of wasps, reminding me that restored species bring with them unsuspected opportunities in the way of habitat and food for others. Regaining the path I walk under a willow, along part of whose overhanging bough a beaver climbed in the summer of 2013. Around me I note the presence of an abundance of Sitka spruce saplings, the offspring of the hundred and fifty year old monster by the burn.

Retracing my steps I join the drive and turn left past the stacks of timber, ready for burning later this winter: Yule logs on an industrial scale. I pass the track that leads through the Tay Bridge Wood, whose name is a reminder of the storm of 28th December 1879. The track, itself, is a mess. Deep ruts, made by heavy forwarders have made bits of it impassable for walkers and light vehicles. Only great machines with huge wheels can travel in and through the plantation, compacting the soil to its scaith. Continuing on my way, I pass some wild boar. They have gathered near a gate and are waiting to be fed. I walk on. The object of my walk is to photograph a new dam down the drive: its building has resulted in the creation of a beautiful pool of limpid water, already colonised by many water beetles. Downstream of the main dam is a smaller one: beavers often build dams in pairs, the lower one adds stability to the upper one by reducing the speed of the current immediately below it. I take a few photographs and, once satisfied, set off back up the drive.

Considering the height of the water at the pool next the drive, which I walked by only a few minutes earlier, there is a remarkable amount of water weed showing. But no, that's not right. The water level has dropped. The dam has breached! In the quarter of an hour or so since I passed it the dam has collapsed. Water is pouring through a gap in the middle of the dam. One hundred yards below, the next dam has been breached too and the water level is dropping to reveal the floor of the pools and burns.

These floors are covered with vegetation: water star wort, water milfoil, pondweed. At the boggy water's edge trails of brooklime tangle with the underlying plants and branched bur reed lies in swathes along the bank. What a diversity: ten times the number of plants there used to be before the beavers came (as I learned from Alan Law's PhD thesis). Meanwhile, the water has cascaded through the gap in the dam and breached the dams below.

A week later, despite nearly constant rainfall, the dam has mostly been repaired, leaving a narrow channel through which the water races. Today, the 19th November, the beavers have closed this gap. Once this work is finished they will turn their attention to the other dams downstream. No doubt all will be ready in time for Christmas! We shall be able to drink their health in Bibergeil, another of those pleasant herbal liqueurs that the Germans make to keep out the winter chill. 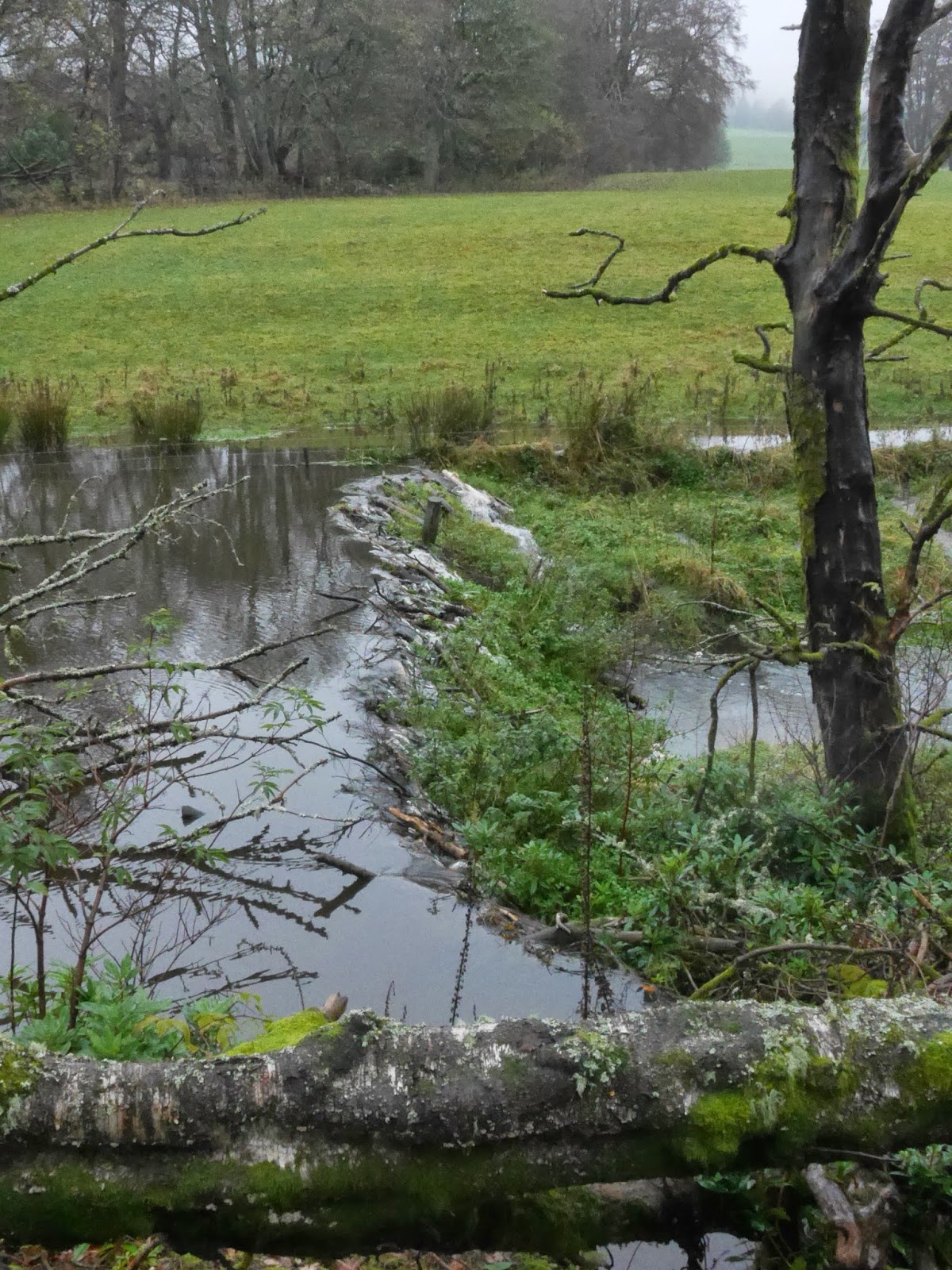 Here is the High Dam before the burst. I think I took this photo sometime in October. 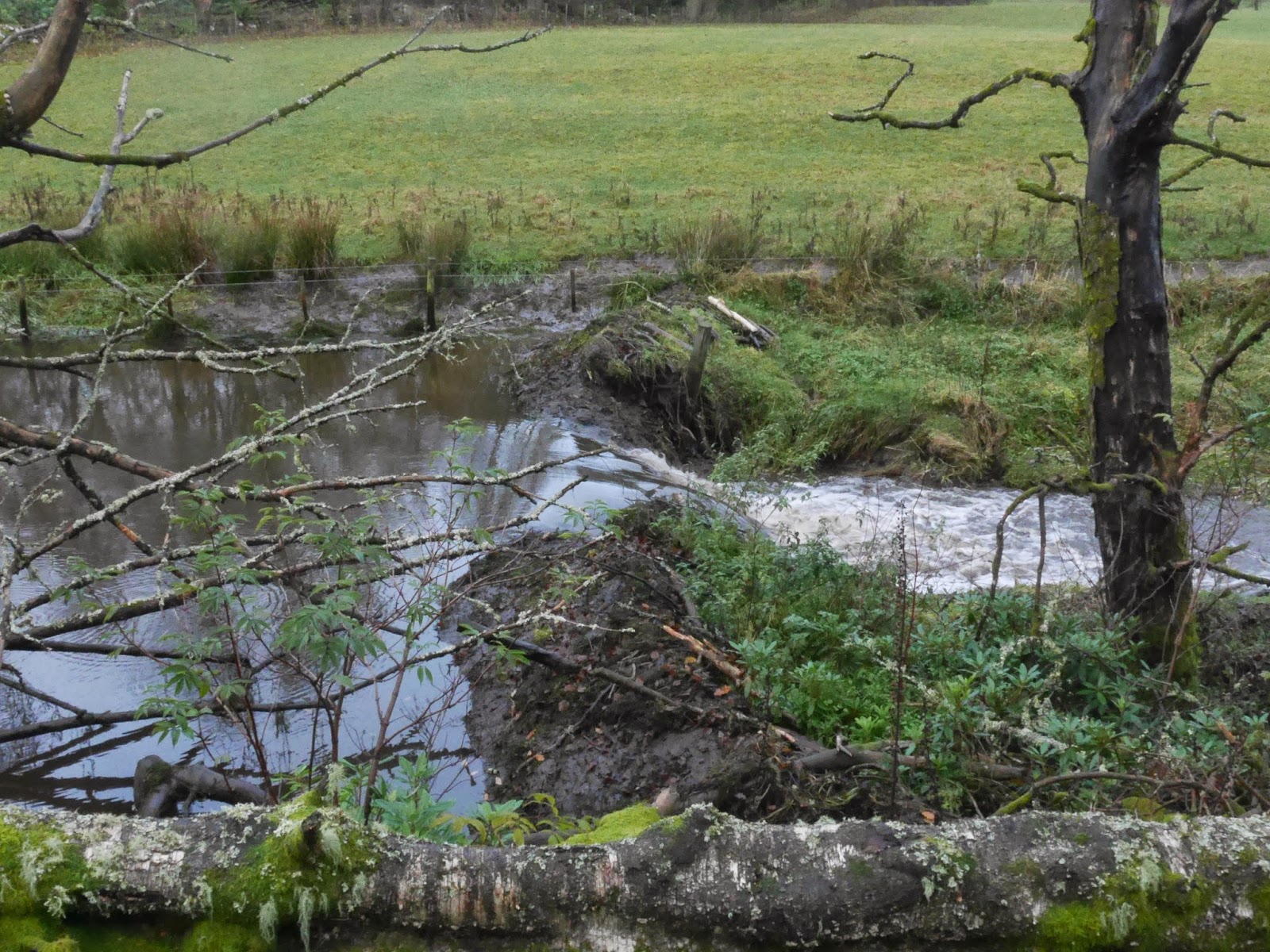 Here is the dam again soon after breaching. 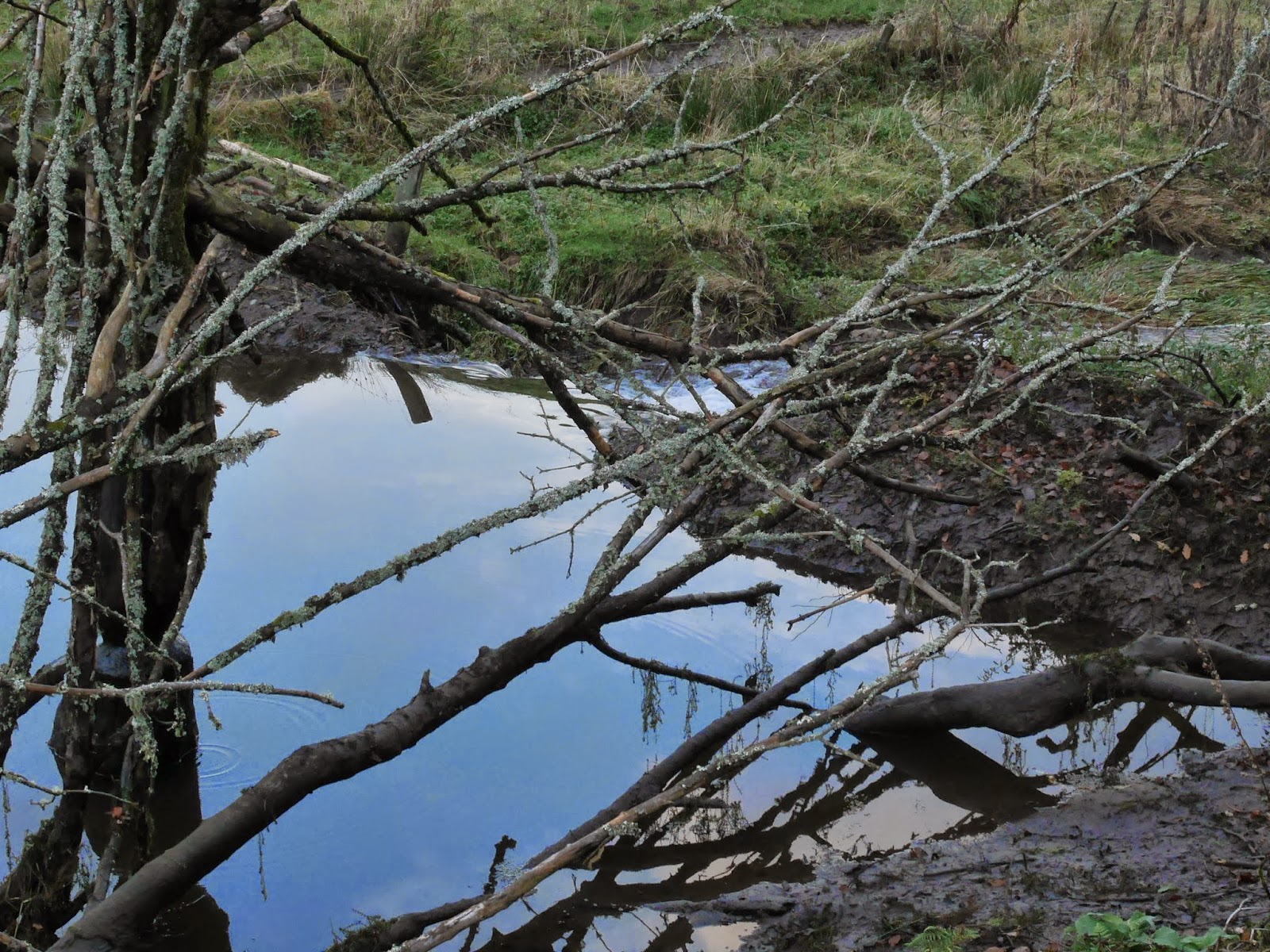 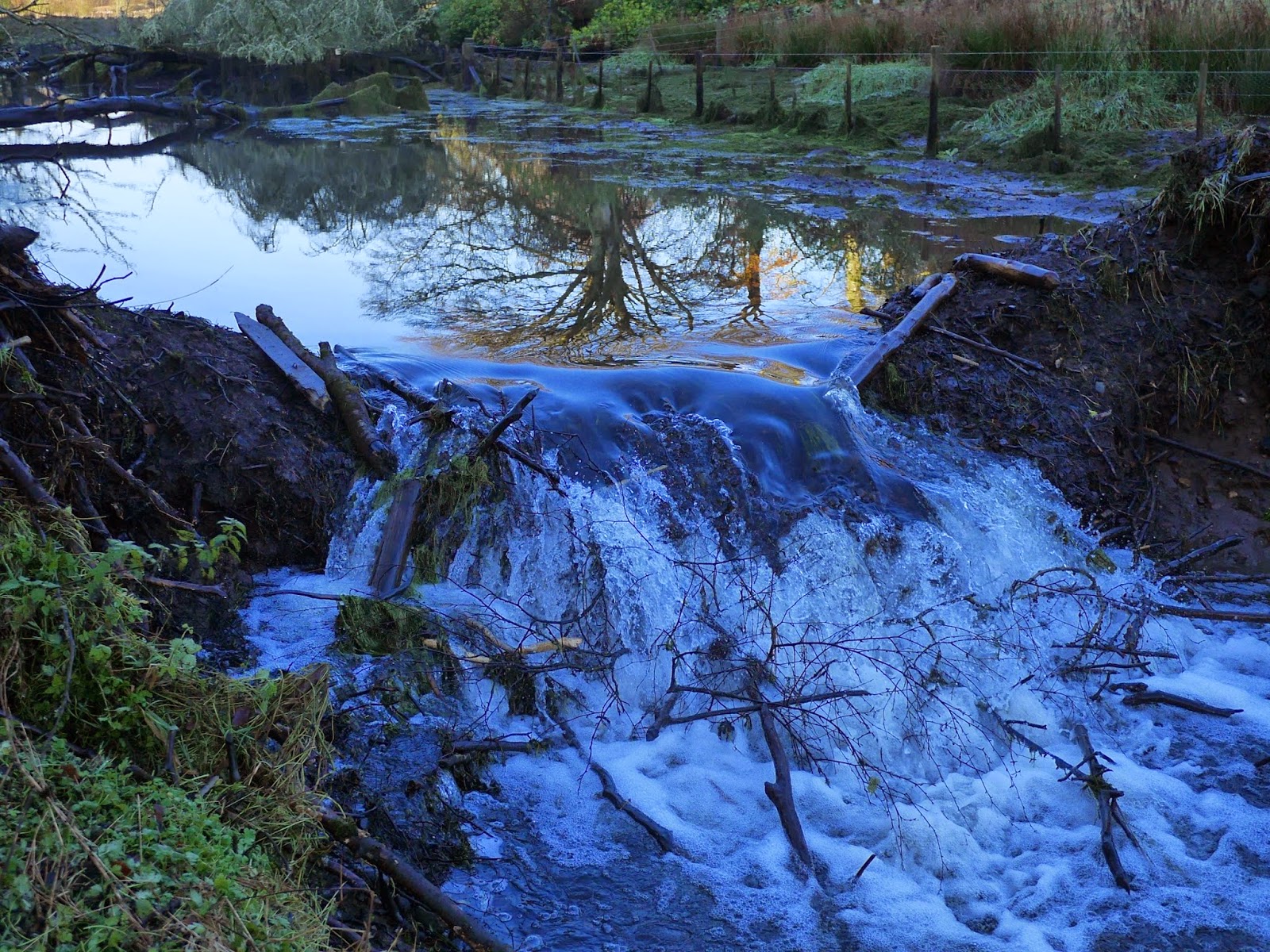 This photograph, taken the next day (8th Nov. or so) shows that the beavers are already rebuilding, despite the fierce onslaught of the water. 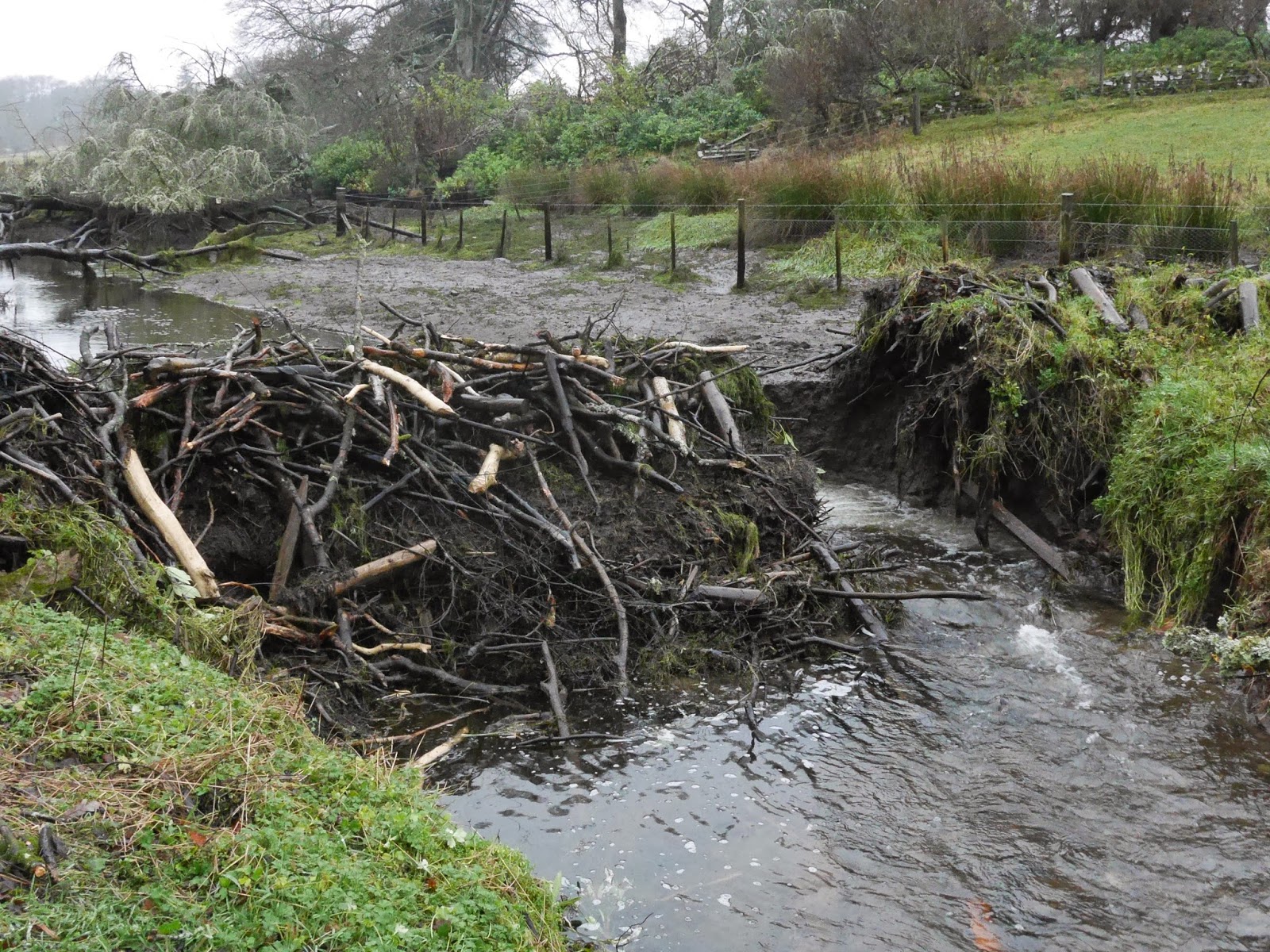 We were away from home until the 15th and I took this photo on the 16th. The beavers' work has been heroic, but what about that gap? 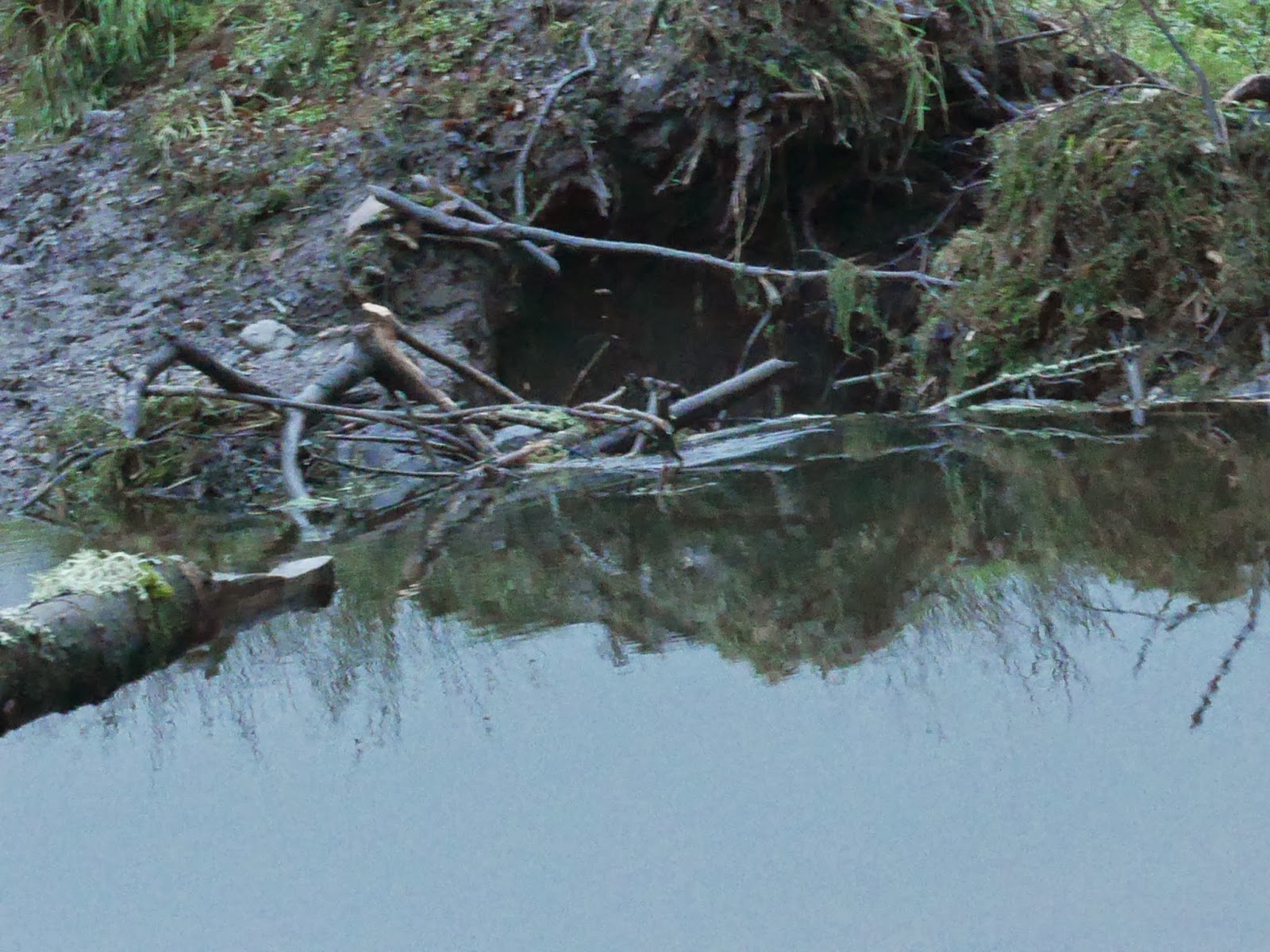 Here is the answer. I took a walk along the Burnished path a couple of days ago and was delighted to notice that they had bridged the gap. The beavers have regained control!

I saw a kingfisher just after the bursting of the dam on the 7th November and have been delighted to see dippers a couple of times in the last week. It was the first time I had seen a kingfisher in that burn.