Warm days, frosty nights, this early spring comes as a surprise after the past two winters. To the North-West a great column of smoke shows that pyromaniac tendencies latent in humans are triggered by the fine dry weather. Luckily for us the wind is in the South.

A compartment of mainly Norway spruce is being clear felled. Industrial scale machinery can quickly make a mockery of any desire for the small scale. Timber can no longer be left in laybys and passing places, ready for uplift. Special loading bays may have to be prepared, bottoming laid and earth moved, to allow the lorries to pick up the timber and take it to the sawmill. A little water running down the drive became a possible problem and so I agreed to minimal dismantling of a couple of dams to allow a lowering of the water level. 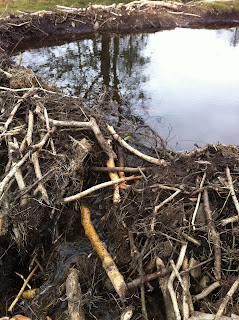 The beavers responded to this quickly by building up the notched dam. The contractors' reply was to make a bigger notch, which breached the dam. The flood cascaded down the ditch, overwhelmed the culvert and rushed down the drive, leaving bars of sand and gravel, and turning it into a temporary river bed. Luckily the flood defences saved Aileen's cellar. 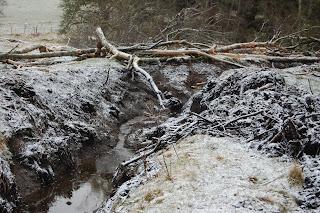 The beavers are now building back the dams that were breached.