A Breached Dam and its Repair 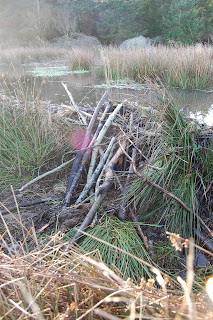 My last post showed a breach in the Long Dam in the Wet Wood. When I found it I wondered if a human had dug a gap in the dam, but I could see no sign of boot prints and there were no signs to show that a spade had been used to breach the dam. I think that the water level must have risen to a point where the beavers in the new lodge on the banks of the ditch upstream of this pool found that their living space was being flooded and so lowered the water level.

As you see from the photograph above, taken at the place that I think was breached (and there is no other place along that dam that has been breached or has such obvious signs of recent structural work), the dam has been repaired.

Some may ask if beavers are really capable of such a capacity to resolve problems. The answer is 'Yes, they can.' 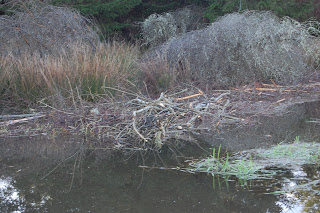 Looking across the dam, this photo shows a substantial food cache that the beavers have been preparing for winter. 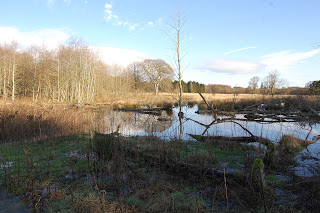 After checking on the dam and finding that the gap had been repaired, I walked round the pool to its western side and took this photograph to show the increasing extent of the water. You may be able to make out the dam at the furthest away extent of the pool. 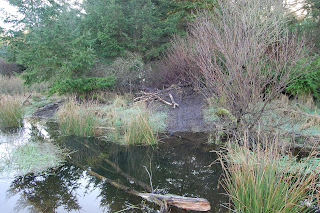 This is the new dam which, I think, may have been flooded by the recent rains and so encouraged the beavers to breach the dam about 30 metres to the east and then repair it once the lodge had been extended.