Walking back along the burn after an unsuccessful search for a lost knife, I saw a fish jumping about on the bank, just below the Third Dam. I closed with it and managed to take a photograph, the second lower down. I tried to get a hold of the fish, but eventually it slid out of my hands and escaped into the meshwork of the dam, to find its way into the water downstream. 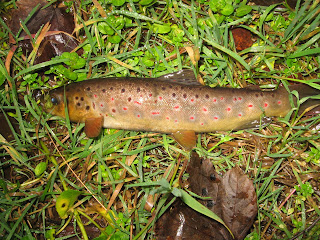 Here is that first fish. 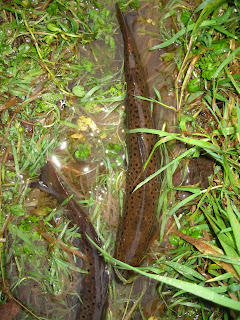 As I grappled with the fish, which I took to be a young trout of a fair size, I realised that it was not alone. There seemed to be three others lying in the shallow water that ran dry just beyond where they lay. 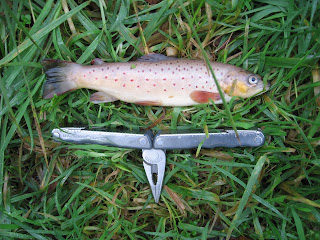 Beyond the group of three there lay a dead fish. This is it with my Leatherman Utility Tool to give an idea of scale (about 20 cm/ 8 inches). The first fish I photographed was considerably longer.

Later, when I looked at pictures in Peter Maitland and Keith Linsell's 'Guide to Freshwater Fish of Britain and Europe' I wondered if this was a salmon parr that was undergoing smoltification. 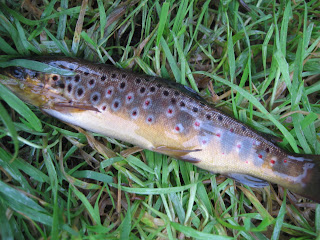 As I had left the dead fish on the bank of the burn I hurried back to find it and put it in our deepfreeze so that it could be examined. At the dam, I found another live fish and photographed it. 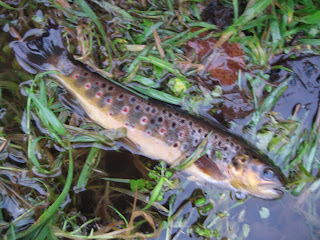 Here it is again. Trout or salmon parr? The fish were lying in the water just to the left of the dead fish and the Leatherman tool. They seem to have swum from the pool upstream, over the overflow in the dam towards the top of the picture and got stuck when they ran out of water. If they had tried the other two overflows they would have found their way downstream safely.
Posted by Paul Ramsay at 17:30